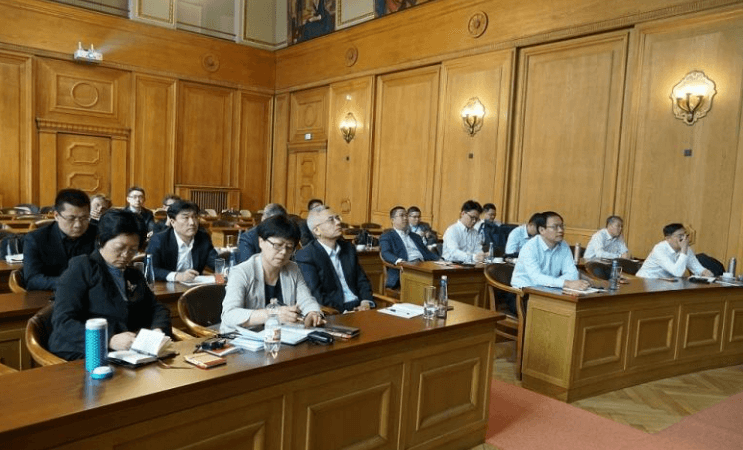 The 2019 Mayors Tour was successfully completed with 16 government officials and business leaders from Tianjin participating this year. Over the course of two weeks, the delegation visited several cities in the Ruhr area as well as Munich in the Southern part of Germany, discussing the ongoing structural change, the energy transition towards renewable energies and climate change and its implications.

In the Ruhr area, the delegation visited the European Green Capital Essen, the Innovation City Bottrop, the Logistic Hub Duisburg, and the Energy Pilot City Herten. Topics include

The Ruhr area has specialized on heavy industry for more than 150 years, however, since the late 1950s, due to the decline in demand and rising competition which made the coal and steel industry unprofitable to produce, the area with more than 5 million inhabitants had to reinvent itself.

The delegation had bilateral meetings with a number of city officials discussing new strategies on addressing the unemployment problem and exchange ideas on how to integrate new service industries. The delegates also visited the old coal mine of the Zeche Zollverein, a UNESCO World Heritage site. The process of reutilizing the former coal mine as a public urban space has been almost completed and reflects a pilot case of successful adaptation to the Ruhr region’s structural change. Over 55 % of all former employees have found new job opportunities in the service sector. But the Ruhr area has a lot of remaining problems: as such, often former “working-class families” have missed out on basic education and therefore struggle to integrate in the new labor market.

2.   Role of public participation in the scope of the Ruhr region’s structural transformation

The traditional model of government has been replaced by a flexible system of communication and adjustment between public and private actors called public-private governance. The general public has actively participated in the transformative process, attending round tables, workshops and projects including the restoration of the Emscher river, the reutilization of the former coal mines and the museums or landscape parks showing the history of the area.

3.   Promoting the use of renewable energy

When visiting the city of Bottrop, the Mayor outlined the city’s approach of promoting renewable energy as Bottrop considers itself an Innovation City. Bottrop Mayor Bernd Tischler said the city decided a decade ago to concentrate on its strengths and focus on its energy supplies evolving towards renewable supplies in line with the national energy transition. That constitutes an enormous endeavor since the majority of the Bottrop residents have come connection to the coal industry. But industry and citizens alike saw the need for a new vision that fit the new national policy environment.

In Herten, the delegation visited the hydrogen center and hydrogen filling station in Herten in the Ruhr area.

Over the past 135 years, energy has always been a dominant issue in and for Herten: in the past, Herten used to be the largest mining town in Europe. From today’s perspective, Herten has embarked as one of the most important locations for hydrogen and fuel cell technology. It is currently leading the way in the production of “green hydrogen” by wind power electrolysis.

The h2herten Anwender-Zentrum GmbH (h2herten Application Center) operates as one of the most innovative power to gas plants worldwide. Built to establish a platform for research and development of integrated energy supply systems to companies, it offers the opportunity to reproduce the entire cycle of energy conversion. This provides insight on how a 100% renewable energy supply can be achieved in the future. The energy conversion process starts with the electrolyzer. With a maximum load of 160 kW 30 Nm3/h can be produced. Afterwards the hydrogen will be compressed from 10 bar to a pressure of up to 45 bar. With this pressure, a total amount of 470 kg of hydrogen can be stored in the storage tank.

In Munich, the delegation visited the city hall and attended several meetings with different city officials. Topics included for instance

a) EU-Project:  Smarter Together Munich

The City of Munich is receiving EU funds of approximately 6.85 Million Euros for Smarter Together, initiated by the EU-funded Horizon 2020 Programme. The German government’s 2050 Climate Plan has set ambitious targets: consequently the primary energy consumption of the existing building stock has to be decreased by at least 80 percent. In response to that, Smarter Together defined goals for the Neuaubing-Westkreuz project area:

Fair trade is a trading partnership, based on dialogue, transparency and respect, that seeks greater equity in international trade. It contributes to sustainable development by offering better trading conditions to, and securing the rights of, marginalized producers and workers – especially in the South. The City of Munich is trying to promote fair trade with its partners in the global south.

The main achievements of the Isar River restoration are summarized as follows:

• Flood protection. Major floods in 2005 had a great impact on the entire catchment area of the Isar River. It is increasingly recognized that restoration measures largely affected the damage caused by floods. Compared to other parts of southern Germany, the flood did not cause significant damage to Munich due to the restoration of the Isar.

• Repair water and land habitats. Previously fixed canal-style riverbeds have been converted into riverbeds of different widths and lengths, gravel shores, and gravel islands. The restoration plan has expanded the main river course from 50 meters to 90 meters, paralleling the front land and floodplain along the river. It has improved average flow and flood runoff and created more spaces for the river. Steep dams fixed with concrete slabs have been replaced by flat sloping embankments and naturally developed embankments. These measures not only restored the appearance of the Isar River but also improved its longevity.

• Improve living quality. Today, the Isar River has become an attractive public space for citizens of all ages. On the riverside, people can pursue leisure activities and sports including biking, jogging, swimming and surfing. Particularly, the artificial surf pier has turned into a popular spot.

d) Development of a new district Freiham and Redevelopment of old industrial area Werksviertel Mitte.  Werksviertel Mitte used to be the main factory of the German food manufacturer Pfanni. Now thrilling architecture, linking of past, present and future and the spectacular mixed use of buildings and public space makes the Werksviertel the prime district of the future. A new neighborhood in Munich’s city centre for living, work, leisure and culture is being created in this 40-hectare former industrial and commercial area. Around 1,200 new homes are planned for some 3,000 citizens, with long-term plans for up to 7,000 new jobs. By addressing the severe housing shortage in Munich,  more than 340 apartments will be available as social housing. The Werksviertel district will enrich the quality of life in many respects and offer people an urban home.