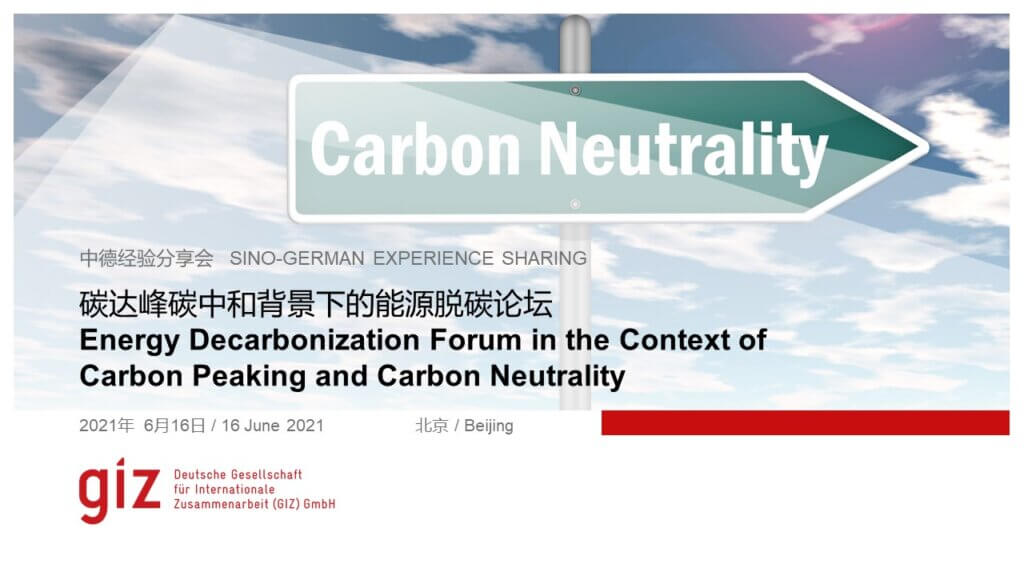 Decarbonising the Energy Sector under the Carbon Peaking and Neutrality Goal

On 16 June, the energy team of GIZ in China organized a Sino-German exchange forum on decarbonisation of the energy sector in the context of carbon peaking and carbon neutrality goals. The event provided an opportunity for sharing experiences, challenges, opportunities, and potentials for cooperation between Germany and China while accelerating the energy transition in both countries.

On 22 September 2020, Chinese President Xi Jinping announced at the general debate of the 75th UN General Assembly that China will strive to achieve peaking of its CO2 emissions by 2030 and to achieve carbon neutrality by 2060. This was followed by a further announcement at the Climate Ambition Summit to raise the target for the country’s nationally determined contribution, proposing China’s CO2 emissions per unit of GDP will fall by more than 65% by 2030, up from the previous 60-65% in 2005. The European Union set itself the target of achieving climate neutrality by 2050 and of reducing greenhouse gas emissions by at least 55% by 2030 compared to 1990, a significant increase from the previous 40% reduction target. Germany also recently revised its Federal Climate Protection Act to set a target of climate neutrality by 2045. In 2020, the German Federal Cabinet also approved the Coal Phaseout Act, which sets the latest date for withdrawal from coal-fired power generation at 2038.

One of the event’s highlights was the launch of two reports: the “China Energy Transition Status 2021” (English version) by the Sino-German Energy Transition Project, implemented by GIZ on behalf of the German Federal Ministry for Economic Affairs and Energy (BMWi), and the “Study on German Energy Decarbonisation Practices and Insights” by the State Grid Huzhou Power Supply Company. The studies draw a clear picture of the status, experiences, challenges, and outlook of the ongoing energy transition in China and Germany, as seen from the perspective of an observer in the other country, respectively.

More than 80 representatives from NDRC, BMWi, the German Federal Ministry for the Environment (BMU), the German Embassy in Beijing, the delegation of the European Union to China, the China Electricity Council, the Energy Research Institute of the NDRC, the State Grid, Peking University, Agora Energiewende, the Wuppertal Institute and other industry and research institutions, as well as representatives from Chinese and German energy companies participated in the forum and shared their insights on decarbonizing the energy sector to reach the net zero emission future. In the panel discussions, representatives from government, think tanks and industries dug deeper into the challenges and cooperation opportunities of the energy transition in China and Germany under the climate target. The discussion centered on finding solutions to common challenges in the transition to a low-carbon energy system. This included, among others, coupling economic growth with decarbonization while accelerating the energy transition, ensuring energy security against the background of a growing share of renewables and coal phasing out, increasing the flexibilization of power systems, taking social impact into consideration for a just transition, as well as ramping up innovative technologies through mutually beneficial cooperation.

On behalf of the German Government, the Deutsche Gesellschaft für Internationale Zusammenarbeit (GIZ) GmbH has been supporting China’s social and environmental development – based on global standards and norms – for nearly 40 years. This work is in the interests of the two countries and takes account of China’s changed role in the world. All GIZ projects in China are incorporated into the comprehensive strategic partnership between Germany and China. In the field of energy and climate, GIZ facilitates the ongoing and far-reaching “energy transition” in both countries through an exchange of policies, best practices and technical knowledge on the development of sustainable energy systems and climate change mitigation within the framework of the Sino-German Energy Partnership and Sino-German Climate Partnership.