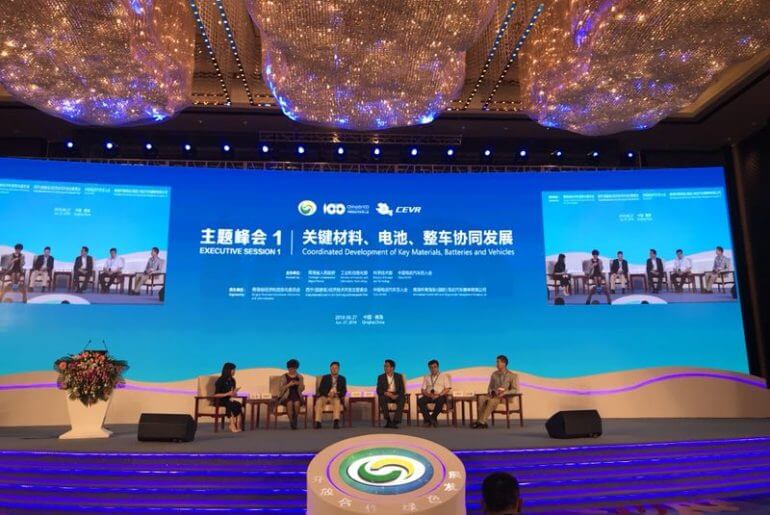 The electric vehicle (EV) industry is one of the priority areas identified in the “Made in China 2025” strategy and the targets are ambitious: by 2025, China aims to achieve a 20% share of EVs in new vehicles sold, up from 3% in 2017. China’s success in the EV industry is tied to several factors, one of the most important being the development of the (lithium) battery industry. Currently, the battery accounts for up to half of the production cost of an EV and with the global push for electro-mobility, analysts predict that the battery market is set to grow at a rapid pace in the coming years.

It is thus not surprising that fierce global competition in this industry is already under way. Chinese champions such as Build Your Dreams (BYD) and Contemporary Amperex Technology Co. Limited (CATL) are benefiting from the rapid development of electro-mobility in China and are fast closing the gap to their main competitors in Japan and South Korea. According to the “Lithium Battery Industry Development White Paper (2018)”, which was released on 27 June 2018 at the China (Qinghai) Lithium Industry and Power Battery International Forum, China has now become the world’s largest lithium battery producer. More precisely, the sales of lithium batteries in China have reached 39.1 GWh, accounting for about 50% of the total lithium-power battery industry.

However, while the production volumes are ever increasing, China’s battery industry also faces a number of crucial challenges that could hinder the achievement of the country’s ambitious EV targets. These include concerns regarding the manufacturing capacities, underdeveloped battery recycling systems, high costs as well as the under-utilization of resources. Developing solutions and technologies to overcome these challenges was at the core of the China (Qinghai) Lithium Industry and Power Battery International Forum, which was held in Xining and jointly organized by the Qinghai provincial government, China’s Ministry of Industry and Information Technology (MIIT), the Ministry of Science and Technology (MOST) as well as the prestigious think tank China EV100.

Capacity Issues and Polarization of the Market

One of the most pressing issues on the Forum’s agenda were the production capacities in China’s battery industry. As Mr. Huan Shilin, Vice Chairman of CATL, pointed out, there are overproduction concerns with 25 KWh batteries; the low-end segment of the market. However, at the same time, underproduction continues to be an issue with the 75 KWh and 100 KWh batteries – the high-end segment of the market. This strong market polarization with short supplies of high-end batteries and excess of low-end batteries is a problem which is likely to persist until 2020, according to Mr. Huan.

Driven by the push of the Chinese government for electro-mobility, the last few years have seen a multitude of companies trying to enter the EV market. Amongst the new companies present at the Forum was Yudo Auto, the first EV manufacturer among the non-traditional vehicle makers to be granted a production license by China’s Ministry of Industry and Information Technology (MIIT).

Mr. Lin Mi, Deputy General Manager of Yudo Auto, highlighted two further vital challenges for the battery industry in China: energy density and costs. To enable EVs to cover a longer distance on a single charge, the energy density of batteries is a critical factor. At present, China continues to lag behind South Korean producers in terms of the capabilities and technology to provide greater energy density. Moreover, given that the cost of the battery makes up a significant part of the total cost of an EV, Mr. Lin stated that it is imperative to reduce the battery cost to make the entire EV industry more competitive in comparison to conventional internal combustion engine (ICE) vehicles.

Along with the growth in the battery industry, the demand for upstream resources such as lithium, nickel and cobalt has surged. Mr. Zhang Yongwei, Secretary-General of China EV100, highlighted the consequences of this development: the expansion of the scope of competition between battery suppliers from the battle for customers to the fight for upstream materials and resources. According to Mr. Zhang, the companies that manage to monopolize these upstream resources today will be in the lead in the next stages of development.

However, while lithium resources in China are relatively abundant, nickel and cobalt are scarce, making China highly dependent on foreign countries for the procurement of these resources. As Mr. Zhang set forth, only a little more than 1% of global cobalt reserves are located in China. This is likely to be a major obstacle not only for the future development of China’s power battery industry, but consequently also for the EV industry as a whole. Particularly in light of rapidly increasing sales figures, this drawback could potentially slow down the entry of EVs into the market in the long run.

These views were echoed by Mr. Zhang’s colleague, Mr. Chen Qingtai, who serves as the Director of EV100. Mr. Chen added that although China is rich in lithium resources, the quality of the lithium is poor due to technological shortcomings. As a result, the utilization rates of lithium are relatively low. According to Mr. Zheng Mianping, academician at the Chinese Academy of Engineering, the import rate of lithium resources is as high as 70%. In response to these circumstances, Mr. Chen proposed that the government should formulate medium- and long-term resource development plans as well as strengthen its effort in mining and recycling lithium, cobalt and nickel as strategic resources. He also encouraged enterprises to move upstream to prevent the monopoly of a few players.

Another topic of considerable importance to the industry is the recycling of power batteries and cascade utilization. The power batteries that have been phased out by EVs still maintain an initial energy of 70% to 80%, and the batteries furthermore contain valuable metal materials which can be reused if treated properly. At the Forum in Xining, experts unanimously called for a strengthening of efforts to recycle power batteries and thus achieve a more efficient usage of resources. Recommendations included the formulation of relevant technical, safety and environmental protection standards, the development of pilot programs as well as the encouragement of financial incentives. For instance, Mr. Chen, the Director of China EV100, suggested that the authorities establish rules on technology development and battery disposal programs in addition to launching a plan to encourage the reuse of power batteries.

China’s ambitious plans for the further development of the EV industry open up great opportunities for the country’s lithium battery industry. However, if these opportunities are to come to fruition, Chinese power battery manufacturers must prepare for enhanced competition in the international market. In 2017, the number of power battery companies in China dropped to about 100 from 150 in 2015, indicating that power battery companies can no longer afford to be just a supplier. Instead, they need to deepen their cooperation with auto makers. Moreover, the development of new technologies and the ability to produce high-end batteries are of critical importance if China is to realize its ambitions to dominate the global lithium battery market. As Mr. Zhang of EV100 has summarized: “If we do not accelerate the deployment of next-generation battery technology, the competitive landscape will be rewritten.”

To achieve this acceleration however, collaboration is essential between manufacturers, suppliers, mine operators, recyclers, governments et al; this was the tenor of the conference: The call for an ecosystem.

Against this backdrop, Ms. Sandra Retzer, who heads the Cluster Sustainable Urbanization, Transportation and Energy at GIZ China, introduced the Sino-German Strategic Partnership on Electro-Mobility. Under the roof of this partnership, both countries do not only cooperate on the topic of electric vehicles (EV), but also seek to find common solutions to the challenges faced by battery recycling. As of today, China and Germany have successfully held four sessions of the Working Group on Power Battery Recycling, thereby actively promoting the construction of a power battery recycling system and discussing cascade utilization in both countries. This collaboration was strengthened further during the 4th Sino-German Governmental Consultations on June 13th 2016 in Beijing. In this context, GIZ China will continue to support both sides in the formulation of policies, standards as well as the development of technology and markets and thus aim to contribute to the sustainable development of the entire power battery industry.