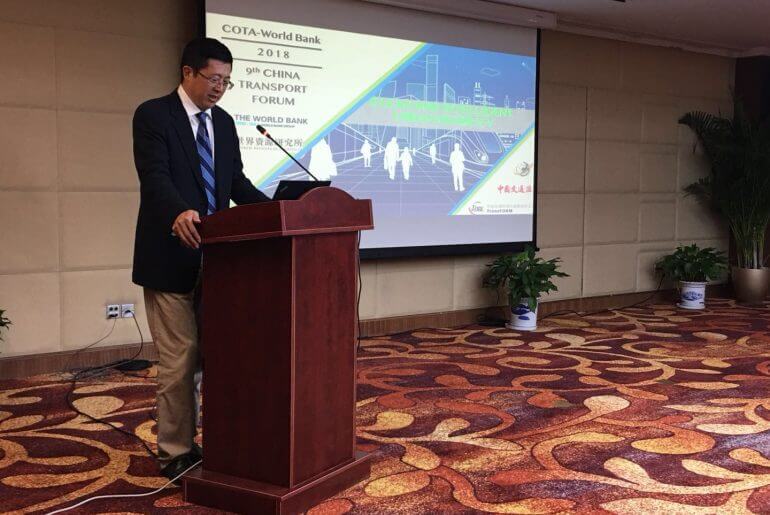 How can big data technologies and New Energy Vehicles (NEVs) contribute to a cleaner and more intelligent urban mobility in China and worldwide? This question took center stage at the 9th COTA-World Bank China Transport Forum on 8 July 2018 in Beijing, hosted by Tsinghua University and jointly organized by the Chinese Overseas Transportation Association (COTA), World Bank and the World Resources Institute (WRI).

This forum takes place every year at the annual COTA International Conference of Transportation Professionals (CICTP) and strives to underscore the largest challenges and prospects for China’s transport development. It offers a platform for knowledge-sharing and exchange on best practices among COTA members, government officials, researchers, practitioners and the private sector from China and abroad. The 2018 forum on “Clean and Intelligent Urban Mobility” shed light on the subject areas urban public transport infrastructure, emerging technologies as well as advanced mobility services. In the opening remarks, Mr. Zhai Xiaoke, World Bank’s Senior Transport Specialist, Mr. Cai Yuhe from China Transport News, and Mr. Zhang Lei, representative from COTA, emphasized the importance of international cooperation for a clean and intelligent urban mobility sector.

Tackling the question of how NEVs can contribute to a cleaner urban mobility, Panos D. Prevedouros, Professor for Civil Engineering at the University of Hawaii at Manoa, presented his study on a multi-dimensional framework for sustainability assessment of various types of vehicles. He concluded that a dynamic sustainability framework must include the latest data of the transportation system, such as, among other things, fuel types, stations and costs, insurance rates and taxes, fuel efficiency, vehicle mileage and battery capacity. Considering the entire life cycle, including production, operation and maintenance, Battery Electric Vehicles (BEV), Fuel Cell Electric Vehicles (FCEV) and Hybrid Electric Vehicles (HEV) in the future will be less energy consuming, compared to conventional vehicles. NEVs have the potential to become the dominant type of light duty passenger vehicles in large urban areas. This depends primarily on their purchase price and regulations favoring them. Mr. Prevedouros also stressed that large polluted cities in Asia are an ideal environment for the large-scale use of electric buses or light duty delivery vehicles (e. g. in Beijing, Shanghai or New Delhi). The city of Shenzhen already operates a 100 percent electrified fleet of more than 16,000 buses (the electrification of Shenzhen’s taxi and logistics vehicle fleet is in progress presently).

Chelaile is a tech start-up which developed a smartphone application that allows users in China to track public bus locations in real time and to set up smartphone alerts when the buses they want to take on the desired routes are arriving. Mr. Sun Xi, CEO of Chelaile, presented his thoughts on how big data can make urban transport more intelligent. In many cities, bus and subway systems are not well connected and synchronized. This leads to dissatisfied customers that have to accept long waiting times, long walking distances between stations and insufficient connectivity. Chelaile not only tries to improve the customers’ travel experience by connecting buses and subways in a more adjusted way, but also works with transport authorities on the optimization of their public transportation systems through big data analytics. Mr. Sun pointed out that his company, whose application is currently available in more than 100 cities in China with roughly 80 million registered users, collects data from three different sources: GPS data from buses, data from public transport IC cards and user-generated data from the application. By means of Chelaile’s big data analysis, recommendations for the improvement of the public transportation system (e. g. optimized routes and locations of bus stations) could be derived. Mr. Sun suggested that more customers would use public transportation if transport authorities worked on the punctuality of public buses or provided, for instance, extra night service routes.

Mr. Li Baoguo from Shenzhen Urban Transport Planning and Design Institute spoke on the operation, evaluation and monitoring of new energy buses in China and presented the results on a related study. The development and use of electric buses in China has risen significantly over the past years, as China has initialized fiscal and tax policies to promote the adoption of new energy urban buses. Although electric bus fleets in cities can reduce energy consumption considerably, compared to conventional bus fleets, concerns regarding the future development have to be taken into consideration. Mr. Li raised the question of how the expansion of electric buses in China will continue in the future after phasing out government subsidies. Furthermore, the assessment of maintenance costs for buses (especially after warranty is expired) is still challenging. Another pressing issue is the extra space of electric buses required for parking and charging in Chinese cities. Mr Li sees a large potential for electric buses in many cities worldwide and they are already widely spread in China. However, in China he is assuming a stable rather than rising electric bus development.

Ms. Chen Xumei from the China Academy of Transportation Sciences (CATS) offered some insights into the campaign “Transit Metropolis” initiated by the Chinese Ministry of Transport (MOT) in 2012. The goal of this initiative is to promote the development of high quality transit services in selected pilot cities in China (not only in mega cities but also in medium sized and in small cities). Ms. Chen pointed out that through the program the reliability of public transportation in larger cities should be further improved, whereas in smaller cities the promotion of green commuting (walking and cycling in conjunction with public transportation) has priority. In order to make this initiative successful, local governments have to provide the right policy framework.

With around 30 million completed trips per day, DiDi Chuxing has surpassed Uber as the world’s ride-hailing leader. Yet, DiDi has become much more than a mere provider of mobility services: the company with its headquarters in Beijing is rapidly expanding both the scope of its business as well as the scale. First, DiDi is increasingly active in areas such as Artificial Intelligence (AI), self-driving technology and smart (public) transportation. Moreover, DiDi in recent months has begun dipping its toes in international waters, launching its services in Mexico and Australia. In this context, Ms. Ren Shuai, Senior Manager for Strategic Investment at DiDi, gave the audience an overview of the company’s current investment fields and international operations. Ms. Ren highlighted that DiDi remains highly optimistic about its plans to expand globally. This optimism is grounded in the fact that users in foreign markets are most often already adapted to other ride-hailing services such as Uber and Lyft. Moreover, she stressed that DiDi will not only remain focused on urban centers, but in the future could also be eyeing rural spaces with its high potential for demand-based transport solutions.

After the experts’ contributions on NEVs, the use of big data, ride-hailing, and the reliability of public transport, a lively panel discussion marked the conclusion of the event. During the discussion, the audience shared their questions and thoughts online via their smartphones. The discussion was hosted by Mr. Daizong Liu, China Transport Programme Director at WRI.