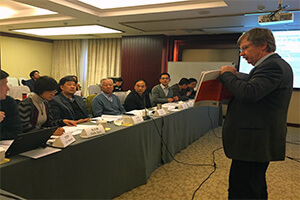 A Challenge for Road Safety in China – Transportation of Dangerous Goods

In recent years, the demand for transportation of dangerous goods in China has been growing enormously. Yet, there is a serious lack of related road safety regulations. Safety awareness and conscious behaviour are still not common among road users. The raising number of road accidents, especially tank accidents with severe consequences cause concern and demand all parties involved to take actions.

On the 11th of December 2014, the workshop on the topic “Transportation of Dangerous Goods” took place in Beijing, initiated by GIZ. During the event, Mr Helmut Rein from the Federal Ministry of Transport and Digital Infrastructure (BMVI) in Germany gave lectures on the legal framework on transportation of dangerous goods in the European Union (EU) and in Germany in particular. Participants of the workshop were Ministry of Transport (MOT), several transport offices from provincial level, Research Institute of Highway (RIOH), science institutes, scholars from universities and representatives from various associations and enterprises. The lecturer, Mr Rein, has been working in this field for more than 20 years. He is the head of unit for transportation of dangerous goods in BMVI.

Mr Rein approached the topic from different perspectives. It became clear that the well regulated transportation of dangerous goods in the EU is based on solid foundation stones. Regulations are summarised in the European Agreement concerning the International Carriage of Dangerous Goods by Road (ADR). It will be renewed and updated every two years according to technical development or demands emerged. This continuous development is a challenge both for the administration as well as for enterprises. It is therefore essential to collaborate in an institutionalized, transparent and international manner.

Many questions have been put forward during vibrant discussions. As one participant mentioned, China has already translated related regulations from the United Nations, its implementation though needs to be figured out. Mr Rein stressed the fact, that the EU respectively the German government is only providing a regulatory framework. General issues regarding the vehicle must be regulated by other establishments. Moreover, capacities in authorities are needed for the enforcing regulations. They need to ensure that controls and inspections are taking place regularly.

The use of ADR was also illustrated by the process of a risk analysis. It must be carried out according to predefined methods in order to decide for each single case whether the transportation of dangerous goods should be accomplished by taking the road or going through a tunnel. Differences between countries became obvious when the question arose whether certain dangerous goods are forbidden to be transported using the highway. Whereas in Germany the railway is regarded as a safer option for transportation, it is the other way around in China. Mr Rein put emphasis on the fact, that for finding a way to improve the situation in China, more flexible and tailored solutions to local circumstances are required.

1. Let only one ministry handle the issue, even though the transportation of dangerous goods has a multimodal and transboundary character.

2. Closely link Chinese regulations with ADR. Originally a European treaty, it is now applied in different parts in the word, as in Brazil, Chile and Thailand.