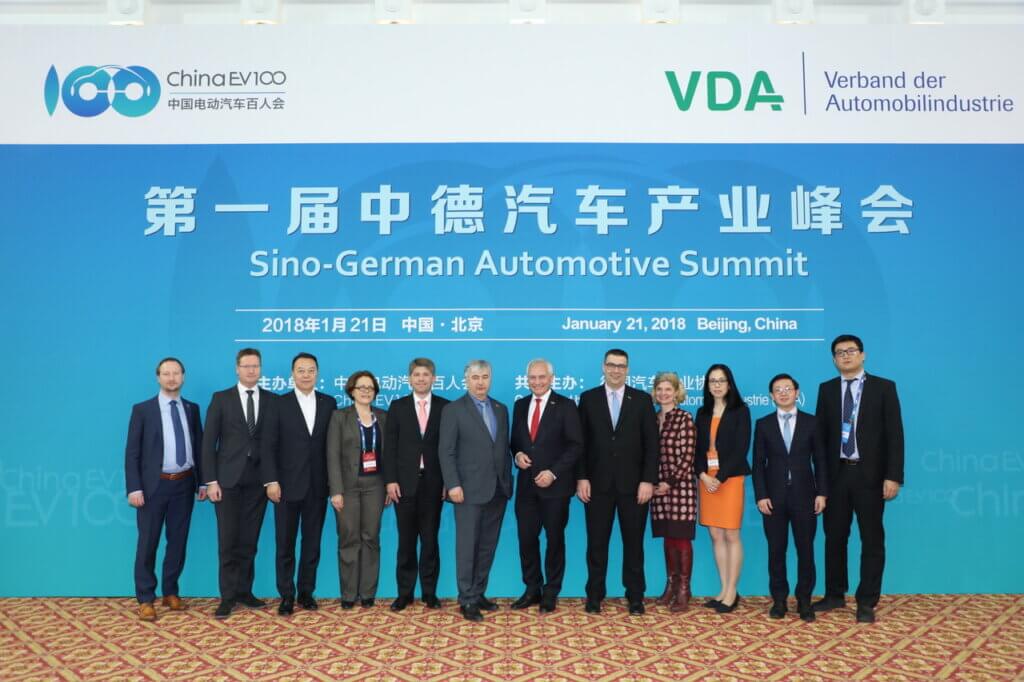 The 4th Annual Conference of the China EV100 was held from 20th to 21st January 2018 in Beijing. This year’s theme was “Achieving global high-quality development”, focusing on electrification and digitalization of the automotive industry. Government bodies from China and abroad, including a delegation from the German Federal Ministry for Economic Affairs and Energy (BMWi) lead by Director General Dr. Wolfgang Scheremet, and several other stakeholders discussed future development strategies and corresponding measures regarding the market development of New Energy Vehicles (NEVs) in China.

The “China EV100” is an association with more than 100 high-ranking members from politics, industry, academia and industry associations. Furthermore, in 2014, an international advisory board has been established. GIZ is one of the advisors and like in previous years, Sandra Retzer, Head of Sustainable Transport, Energy and Urbanisation of GIZ China, participated in the closed-door meeting of the EV100 members. The goal of this exclusive meeting is to gather all relevant stakeholders in China’s NEV sector in order to jointly discuss technical and political challenges as well as future topics. Therefore, this year several start-ups, battery manufacturers and suppliers joined the meeting and elaborated on the transformation of China’s NEV industry.

For the public sessions, the centrepiece of the EV100 Conference definitely is the presentations by the top government leaders from the Chinese ministries in charge of NEVs:

WAN Gang (Minister, Ministry of Science and Technology, MOST) appreciated the market and technological development of NEVs. However, conventional internal combustion engines won’t be replaced soon, especially in the long distance cargo transport and the agricultural sector.

MIAO Wei (Minister, Ministry of Industry and Information Technology, MIIT) outlines the accelerated market development of NEVs and the technological breakthroughs in key elements, like batteries and charging infrastructure. Moreover, MIIT is working on new challenges, e.g. optimizing the regulatory framework for the promotion of innovations as well as for further opening-up the Chinese market.

LIN Nianxiu (Vice Minister, National Development and Reform Commission, NDRC) emphasized the importance of intersectoral collaboration for the transformation of the automotive sector. Besides the electrification of the propulsion system, digitalisation is the key element of the Chinese strategy, according to Lin. NDRC is leading the work to strengthen the complete value chain of intelligent and connected vehicles.

Several side events have been organized alongside the EV100 conference. Definitely, one highlight was the 1st Sino-German EV Industry Summit, promoting the information exchange between Chinese and German stakeholders. The session started with opening remarks from Dr. Scheremet and Deputy Director General of MIIT, Qu Guochun, followed by presentations from German and Chinese OEMs, who introduced their strategies and future products. It became clear that automakers from both countries have started massive investments in research and product development in order to remain competitive in the world’s largest NEV market.

Summing up, there are two main messages from the conference:

These trends will change the automotive sector, increase comfort and reduce environmental impacts. But there is still a long way to go, especially regarding data security, charging infrastructure and harmonization of standards. China and Germany both expressed the intention for further cooperation on these topics in order to promote sustainable development in their countries.

The project “Advisory and Support of Sino-German Cooperation on Electro-Mobility – Phase II” implemented by GIZ on behalf of BMWi, supported the EV100 Annual Conference of 2018. The aim of the project is to facilitate the dialogue between BMWi and MIIT and other stakeholders of both countries as well as to provide expert advice in the fields of market development, standardization and development of charging infrastructure.