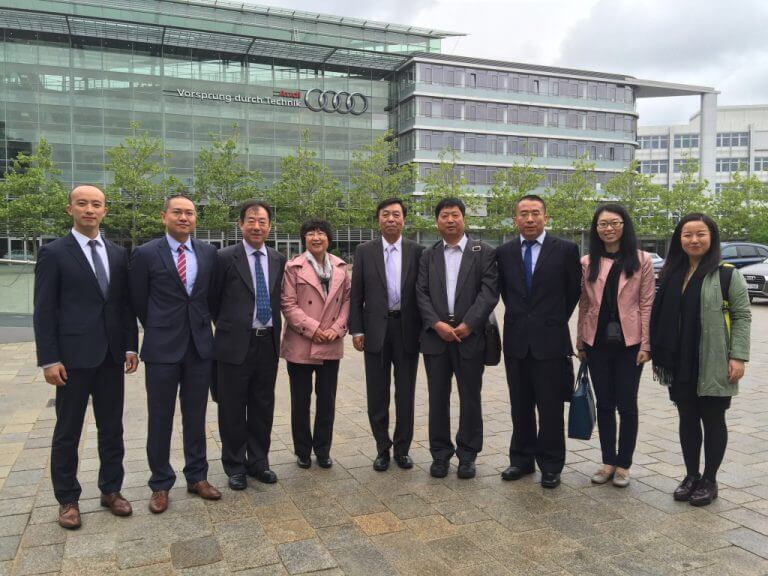 Beijing and Berlin Agree on Further Cooperation on Electro-Mobility

China and Germany have a long-standing cooperation on the development of electric vehicles including policies, standardization, demonstration projects, environmental assessments and market development. A number of bilateral cooperation projects are running under the framework of the Sino-German Electric Vehicle Strategic Partnership. The Sustainable Transport Programme of GIZ provides support for this partnership and is currently implementing the Sino-German cooperation projects with Chinese partners from national ministries and research institutes. Beyond that, GIZ established a dialogue platform for cities in China and Germany with the aim of facilitating the exchange and deepening the cooperation between municipalities of the two countries.

As the capitals of China and Germany, Beijing and Berlin keep a fruitful relationship as Partner-Cities for 21 years. Both cities announced their willingness to establish a broader cooperation in various topics, among them is the promotion of electric vehicles. The mayor of Berlin, Mr. Wowereit and Vice Mayor of Beijing, Mr. Zhang Gong, met in Beijing last year to discuss possible areas of cooperation. Against this background, the Sustainable Transport Programme of GIZ organized a study tour for officials from the Beijing Commission of Science and Technology (BCST) and Beijing Municipal Commission of Transportation (BMCT) to Europe for the period of May 18th to 22nd with the aim of facilitating the exchange and deepening the cooperation between Beijing and Berlin as well as other cities in Europe regarding electric vehicle demonstration and market development.

Led by Mr. Zhang Guanglian, Vice Director General of BCST, the delegation visited the Berlin Agency for Electro-Mobility (eMO). A Memorandum of Understanding to intensify the cooperation on electric vehicle was signed during the meeting. Topics of cooperation include E-carsharing, environmental impact of electric vehicles, integration of renewable energy into charging infrastructure.

On May 21st, the delegation was invited to participate in the international conference “Emobility – Globally Connected” in Berlin, which was hosted and organized by Berlin Agency for Electromobility eMO. Mr. Zhang Guanglian delivered a welcome speech together with Mr. Guido Beermann, State Secretary of Senate Department for Economics, Technology and Research in Berlin. During the panel discussion session on the topics of “Cities Approach in Sustainable Mobility”, Mr. Chen Guiru, Vice Director of Beijing NEV Promotion Center gave a detailed introduction on the EV development in Beijing and participated in the panel discussion with representatives from Germany, Norway and Amsterdam.

Apart from the meeting with Berlin, the delegation also visited  “Amsterdam elektrisch”, the National German “Showcase Project” of electro mobility in Bavaria and the Audi AG in Ingolstadt. Representatives from Beijing had intensive discussions with the technical experts in respect to promotional policies, (for example favorable parking policy), demonstration projects focusing on charging infrastructure, mobility pattern and user behavior as well as technology of electro mobility.

This study tour has provided the participants of the delegation with a good overview of the current status and activities implemented in selected cities in Europe regarding EV promotion.