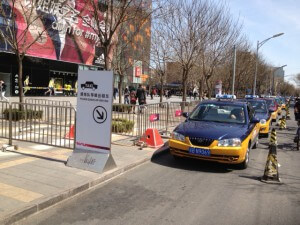 The difficulty of hailing a taxi is a frustrating but common experience for most Beijingers, especially during rush hour. Also cab drivers often refuse certain routes or destinations. Hence, the public is complaining about the increasing difficulty of hailing a taxi when they most want it. On the other hand, taxi drivers are dissatisfied, too. Low payment combined with high fees, they have to pay to their taxi companies, and long working hours define their daily life. At the moment, Beijing taxi drivers have to pay fees of approximately 3,000 CNY (480 US Dollar) per month to their taxi companies (China Daily, 18/04/2013). As a result, some of them choose not to drive during rush hour at all. Due to the high congestion in the capital, driving becomes unprofitable: long waiting hours result in a loss of time and money. The current extra charge of 0.2km/min for congestion rides does not cover the deficit. This leads to a low availability of taxis during peak times. Consequently, the overall taxi situation in Beijing is waiting for a change.

But increasing the number of taxis is only one step in Beijing’s taxi reform. Further, the government will increase the taxi fare, a decision which was made on a public hearing on May 23rd. It is planned to increase the basic fare from currently 10 CNY up to 13 CNY for distances below 3 km. In addition, the rates per km will rise from 2 CNY up to 2.3 CNY or 2.6 CNY for distances more than 3 km. The fuel surcharge, currently 3 CNY per kilometre and depending on the current fuel price, will be fixed at 1 CNY per kilometre. For organizational benefits, the possibility to reserve a taxi in advance becomes more expensive (increase from 3 CNY up to 5 CNY for reservations more than 4 hours in advance, and 8 CNY for reservations on short-notice). Regarding rising prices, taxi drivers fear a loss of business (China Daily, 18/04/2013) because passengers may switch to public transport instead of taking a cab.

In order to estimate the impact of the price reform on customer demand GIZ China calculated typical scenarios based on a short distance (below 3 km), an average distance (7 km) and an long distance fare (15 km) assuming a price increase of 2.3 CNY per kilometre. The intensity of congestion on longer rides has the most significant impact on the price. With a driving speed below 5km/h (congestion), the extra charge rises from 0.2 km/min up to 0.4 km/min.

Short distance fares (below 3 km) increase by 30 % (3 CNY). Thus, it poses a disincentive for passenger’s to use a taxi for redundant rides and distances which can be covered by walking or cycling. Former taxi customers may also switch to public transport such as buses or bike-sharing services.

The impacts on medium distances (7 km – average travel distance for taxis in Beijing) are relatively low, if the congestion is low. The price increases approximately 2 CNY (10 %). That relatively low price increase results of the fixed fuel surcharge of only 1 CNY/km compared to the before-fare-increase scenario, where fuel surcharges reached 3 CNY/km. Thus passengers are still likely to use taxis at a driving distance of 7 km if congestion is moderate. But as traffic density rises, the impact of the price leverage on taxi prices becomes stronger. 10 Minutes waiting in traffic jam will increase the price up to 7 CNY (30 %), 25 Minutes even 15 CNY (50 %). Therefore, passengers may switch their transport mode to subway, especially during the highly congested rush hour.

Even if the percentage effects might seem drastic in some cases, the fear of taxi drivers to lose a lot of costumers seems baseless, because of two reasons: First, Beijing still lacks alternatives to taxis and second, the majority of passengers will still hail a cab, given the average travel distance of 7 km (see medium distance scenario). If the price increase still keeps passengers inside the taxi, the more important question is, if it can pull taxi drivers back behind the wheel during rush hour. The effectiveness of that economic incentive still has to be investigated.