The 5th issue in 2018 of our China Transport Sector Policy Briefing is here! The Sustainable Mobility Team at GIZ in China provides you with a monthly summary of new important policies in China’s transport sector.

Recently, the Chinese government focused on the development of New Energy Vehicles (NEVs) and Intelligent and Connected Vehicles (ICVs), while singling out Jing-Jin-Ji as a demonstration zone for structural adjustments in the transport sector. Additionally, the first standards for the transportation of dangerous goods and a report on the environmental impact of the transport sector were released.

NEV and ICV development, measures for structural adjustments, environmental impact of emissions and standards for the transportation of dangerous goods

After major national-level policies on New Energy Vehicles (NEVs) have been released in 2018, several Chinese provinces and cities in November released their own plans to translate national policy into action on a local level:  for example, the Province of Henan released the “Three-Year Action Plan on NEV and ICV Development 2018-2020 in Henan” on 28 November 2018. Henan aims at a NEV production capacity of 300,000 vehicles, 50% of which shall be intelligent and Connected Vehicles (ICVs), as well as a local sourcing rate of automobile parts of 60%. The province also plans to launch ICV pilot zones.

During the 2018 congress, the China Society of Automotive Engineers (SAE) released an “Implementation Plan of Eight Key Projects for Medium and Long Term Development of the Automotive Industry”. The Plan envisions that until 2025, NEV ownership shall reach 20 million units with a yearly sold amount of 7 million NEVs, including 50,000 fuel cell vehicles. 500 hydrogen refueling stations are to be added and the market share of hybrid vehicles shall reach 20%. Fuel consumption of passenger cars shall be reduced to 4.5l/100km and fuel consumption of trucks shall drop by 30-35% compared to 2015.

Nevertheless, the healthy development of NEV charging infrastructure remains an obstacle for the Chinese government. Therefore, the National Development and Reform Commission (NDRC), the National Energy Administration (NEA), the Ministry of Industry and Information Technology (MIIT) and the Ministry of Finance (MOF) jointly released the “Action Plan on Promoting the Reliability of NEV Charging”. The Plan promotes high quality technologies, and aims at increasing operational efficiency, optimizing charging infrastructure, ensuring electricity supply and establishing relevant norms and standards. Specific tasks have been formulated for each target. The Action Plan announces that effective implementation shall be supported by innovative business models and governmental policies as well as a strengthened role of industry associations.

When it comes to NEV development, the city of Shenzhen has always been the frontrunner. In order to make the management of NEV charging infrastructure more efficient and to improve its safety, the city government issued new approval criteria for the construction of charging infrastructure. These criteria include quality, electric and fire safety, as well as charging and communication coherence. Operators will have to comply with those criteria and will be supervised by the city government.

And where will China go when it comes to ICV? The goals are clear: In a Working Plan, MIIT announces that by 2020, China aims to develop several key ICV technologies, including computer processors, intelligent software algorithms, automated driving systems and vehicle communication systems for conditional automated driving (level 3). In the areas of image processing, information exchange and intelligent decision support, China aims to reach international standards.

In its “China Vehicle Environmental Management Annual Report (2018)”, the MEE lays out administrative measures to limit the environmental impact from vehicle emissions in China, such as improving regulations, eliminating old vehicles and improving fuel quality. Furthermore, it published data on vehicle distribution and emissions: In 2017 China’s vehicle stock reached 310 million units, out of which vehicles powered by gasoline, diesel and natural gas accounted for 89%, 9.4% and 1.6% respectively. The report also shows diesel trucks to account “only” for 7.8% of the total number of vehicles, but they are responsible for 57.3% of nitric oxide and 77.8% particulate matters emitted by motorized vehicles in 2017.

China’s truck market is still quite fragmented and the number of trucks sold reached a new peak in 2017 with more than 1.1 million vehicles (in comparison: European trucks sales have been slightly above 300 thousand vehicles in the same year). The increasing number of trucks and the lack of standardization lead to several severe accidents in the past years, in particular when it comes to transportation of dangerous goods. That is why the Ministry of Transport issued the “Regulations concerning road transportation of dangerous goods” as the first integrated regulations for road transport of dangerous goods in China. It refers to the European Agreement Concerning the International Carriage of Dangerous Goods by Road (ADR) in a step to adopt ADR in China. The new standards came into effect on 01 December 2018.

Dear readers, in China everything slows down right now as the Chinese New Year is coming up next week. Therefore, we wish all of you a Happy New Year of the Pig! Like we say in German: “Schweine bringen Glueck”. The Chinese think alike. So we do wish lots of luck for you and your families for the New Year. 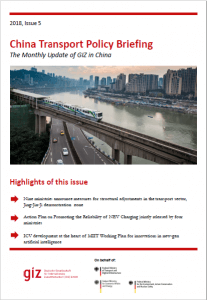