The newest issue of our China Transport Sector Policy Briefing is here! The Sustainable Mobility Team at GIZ in China provides you with regular summaries of important policies in China’s transport sector.

Inside this issue of the China Transport Sector Policy Briefing

The 5th Issue of the China Transport Sector Policy Briefing 2019, as this year’s summer edition, covers highly relevant and exciting developments in May, June and July.

One of the highlights of this Issue is that China discusses to adjust its Dual Credit System, which is used to reward or penalise carmakers based on their share of NEVs and Corporate Average Fuel Consumption.

The Chinese government has also released work plans to develop standards on New Energy Vehicles (NEVs) and Intelligent and Connected Vehicles (ICVs), directly referencing the cooperation with Germany and the EU.

After Shenzhen has successfully electrified its public bus fleet, the central government has now requested all provinces, autonomous regions and province-level municipalities (Beijing, Shanghai, Tianjin, etc.) to submit goals and timelines for (partial) electrification of their public bus fleets.

The topic of Hydrogen has come up repeatedly in the past few months as an area in which the Chinese government wants to increase its efforts. If it follows the plan published by the Society of Automotive Engineers (SAE), the Yangtze River Delta, an area around Shanghai (of the same size as Germany) is set to become China’s industrial base and pilot region for hydrogen-related infrastructure and industries. Zhangjiakou, the host of the Winter Olympics 2022, has already published its strategy to become leader in hydrogen energy technologies by 2035.

The long-awaited Action Plan on Green Mobility (2019—2022) was released by 12 ministries in May: Improvement of public transport and integration of non-motorized transport are the two main pillars. This was followed by a Plan for the Digitalisation of Transport in July, which is based on upgraded infrastructure and the collection and usage of big data. 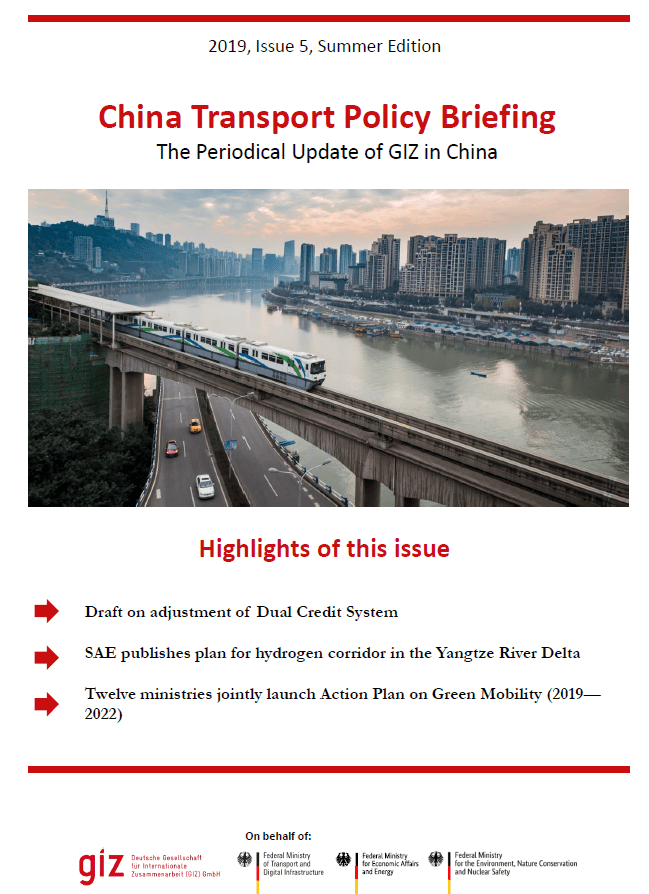