Energising Transport and Mobility in China – An Initial Study on Mobility, Drives and Fuels in China [EN Version]

As a major global economic driving force, the transport sector –and in particular the automotive sector– has provided employment and shaped technological progress over the course of a century. This is true for Germany as much as it is for China. Daunting climate and environmental concerns have cast a large shadow on this development. The tangible negative impacts of transport such as air pollution, accidents, noise and congestion are more than a nuisance to residents living, working or visiting in Chinas’ megacities, along Chinas’ coastlines and waterways. A less perceptible, yet significant impact is the resulting carbon dioxide (CO2) emissions from internal combustion engines burning fossil fuels. The associated negative social, environmental and climatic impacts pose a dilemma for policy makers worldwide. Energy security, climate protection and air quality have to be taken into account as much as economic efficiency, growth and acceptance. Accordingly, the purpose of practical transport policy is to facilitate mobility and to ensure that it is environmentally, economically and socially sustainable.

A Mobility and Fuels Strategy (MFS) attempts to address this and attempts to shed light on the following key issues: How can policy makers drive the process towards a future-proof mobility? How can the transport sector follow the lead of the energy sector, which has already embarked on a “Energiewende” (energy transition)? Which drive technologies, fuels, measures and regulations are available and suitable? These are among the main questions that the MFS of the German government answers. Questions that are equally pressing in the Chinese context.

The report summarises the research conducted by the Deutsche Gesellschaft für Internationale Zusammenarbeit (GIZ) GmbH on behalf of the German Federal Ministry of Transport and Digital Infrastructure (BMVI). The project called “Energising Transport and Mobility in China” has been implemented in cooperation with the Ministry of Transport (MoT) of the People’s Republic of China and its think-tank the Transport Planning and Research Institute (TPRI). The purpose of the project was to identify the current development trends, barriers and prospects of key segments of a MFS in China with a focus on transport demand, fuels and drive system alternatives

Energising Transport and Mobility in China – An Initial Study on Mobility, Drives and Fuels in China

The project context: Sino-German Cooperation
During the Climate Negotiations in Paris end of 2015, China and Germany have shown dedication to protecting the climate and both identified transport as one of the key sectors to achieve this. This has been re-confirmed during the Sino-German government consultations that took place in Beijing in June 2016. It has been agreed by German Chancellor Angela Merkel and Chinese Premier Li Keqiang to cooperate in the area of alternative propulsion technologies, such as electric vehicles, but also to strengthen the cooperation in the railway and aviation sector. Parliamentary State Secretary at BMVI, Dorothee Bär, and Minister Yang Chuantang of the MoT of the Peoples Republic of China jointly signed a Memorandum of Understanding (MoU) to cooperate in the field of Mobility and Fuels Strategies and strengthen the cooperation between the transport industries in both countries. 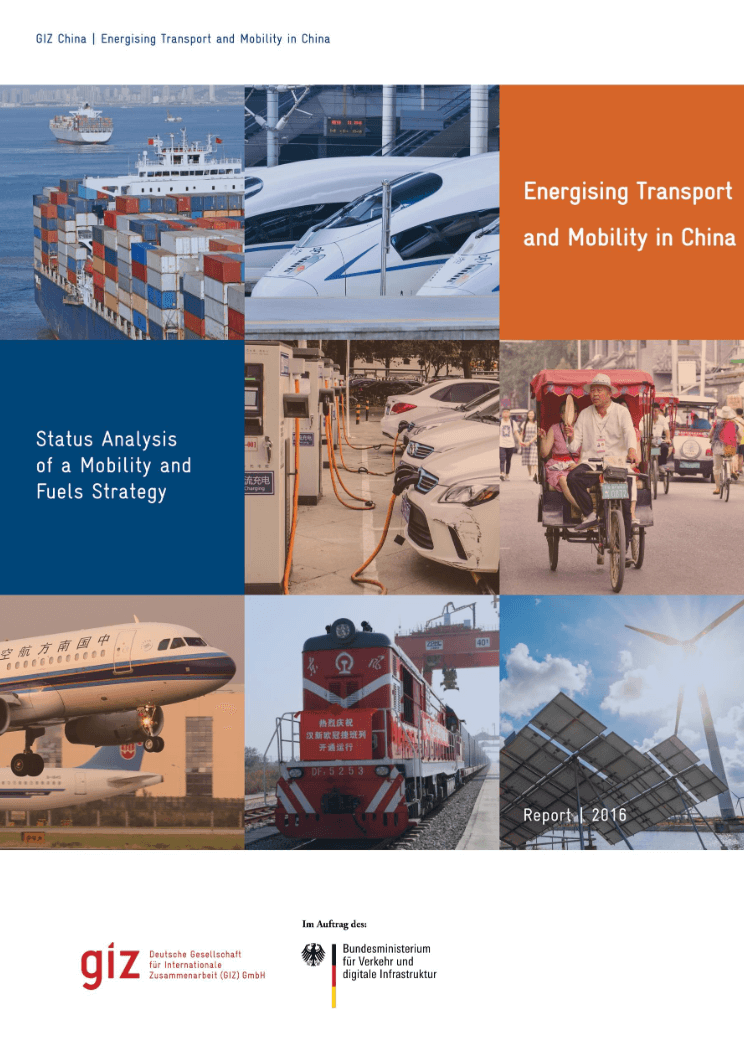