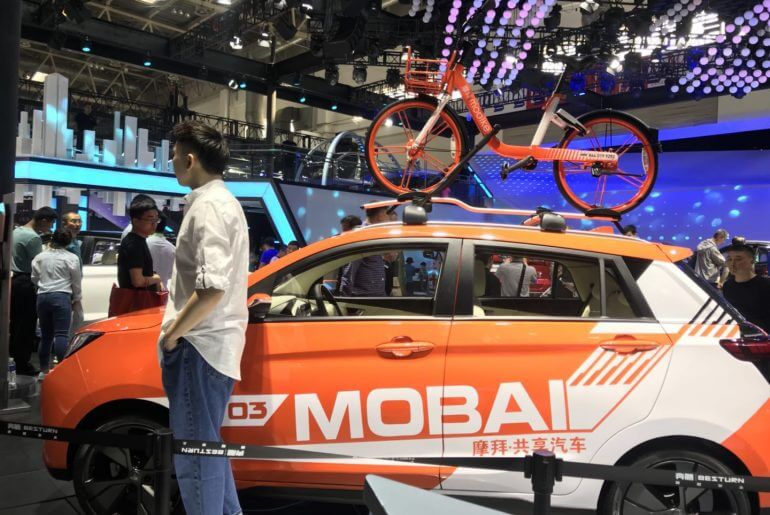 The 2018 Beijing International Automotive Exhibition (also known as Auto China 2018) took place in Beijing from April 25 to May 4 under the motto “Steering to a New Era”. Over 1,200 exhibitors presented their newest gear, among them 1,022 vehicles and 105 world premiers. More than 40 global OEMs, such as BMW, VW, Daimler, Peugeot, Toyota, Tesla were present.. Next to the usual suspects, and almost more exciting, were the sheer amount of Chinese brands. Some had been around for years, such as BYD, FAW, Brilliance and Chery. Others such as the Chinese companies NIO and Byton, have received a lot of attention by getting large investments, establishing partnerships with battery manufacturers (like CATL) and IT companies (like Baidu).  But we also saw a lot of companies that had hardly been heard of before and that made their first appearance at Auto China 2018. Among them are brands such as WEY, Weltmeister, YUDO, or Singulato, some of which we expect to hear more of over the next years.

And indeed, it was particularly the cars of the new entrants, which made visiting Auto China interesting. While the global OEMs did not spare costs to decorate big stands to showcase their mostly conventional combustion engine cars, the new Chinese exhibitors proudly showed-off their mostly electric vehicles. They brought small two-seaters , like the LITE, sports cars like the ones by QIANTU – and of course SUVs, like Byton`’s. Obviously, also global OEMs exhibited some of their electric vehicles, such as Porsche`s Mission E Cross Turismo, or Mercedes Concept EQA. Only very few exhibitors at the Auto China showed fuel cell (hydrogen) cars. Exceptions were concepts by Toyota, Xian Dai (现代) and also BMW`’s X7.

Apart from the number of new energy vehicles versus conventional vehicles displayed, the big difference was that global OEMs seemed to present their NEVs as a side-note (or an outcast) on extra platforms away from their pre-dominantly conventionally-fueled or hybrid cars. The core of the global OEMs`’ presentations were their classic big engine SUVs or limousines, the cars that had made them successful in China and the world for the past many years. On the other hand, NEVs took center stage for the new Chinese brands – many of which did not even show anything but NEVs. BYD’s CEO, Wang Chuanfu, presented his company as the world’s top NEV maker that already entered a new era of automotive manufacturing that is electric, intelligent, connected and global.

A similar picture of “classic” versus “future” emerged when looking at the interiors of the cars: Where global OEMs mostly stuck to their well-and-tried designs with minor adjustments, many Chinese companies dared to present more radically re-designed interiors. For example, the SUV by Byton, a brand that aims to be global by developing their cars in California, Munich and Nanjing. They presented a single touch screen (0,25m x 1,25m) that they called “the world’s first shared experience display”. During the press conference Byton’s CEO Dr. Carsten Breitfeld explained that their car is designed for autonomous driving and sharing. Byton plans to make their level 3 car available by the end of 2019, whereas they expect the launch of a level 4 car in 2020. A similar – and more futuristic interior was shown by WEY, another new Chinese brand. When comparing this display, for example with Maybach’sultra-luxury SUV, which has two separate and rather meager iPad-sized screens, the different approaches to innovation become clear: the Chinese brands don't even bother to try the “classic” interior design, but leapfrog in technology application in order to appeal to the tech-savvy, entertainment-hungry  modern customers. The new producers are not inhibited by legacy designs. This is in contrast to global brands, which so far take a much more cautious approach, possibly to not overwhelm their existing customers – and possibly to not overwhelm their designers, technicians and staff.

Auto China 2018 also exhibited some concepts for autonomous cars. Volkswagen, for example, showcased their concept autonomous car, which nevertheless looked mostly like a regular car without a steering wheel. More radically, again, was the Chinese producer NIO, which offered a living room inspired interior with a corner seat for lounging, underlining its concept by placing toys on the floor of the car.

From a sustainable transportation point of view, we missed concepts for mobility rather than for (car-oriented) classic transportation. Most of the car companies that we saw focused their shows on car ownership, selling the dream of “your own car” with pictures and movies of happy families with their car – often enough in the beautiful backdrop  of green nature. The display of new mobility concepts, such as shared mobility, was mostly lacking. A notable exception was the full electric car Mobai that is used by the bike-sharing giant Mobike to offer its new car-sharing service and, somewhat further away, Renault’s concept car for robo-taxis.

Overall, Auto China 2018, was a show-case for Chinese OEMs with many new brands entering the market and new energy vehicles taking center stage for them. Otherwise, it was a show that stayed mostly in the beaten and well-known tracks. Thus, the motto “Steering to a New Era” symbolized, if anything, a new era of Chinese OEMs and brands that seek to enter the global markets.

This article has been co-authored by Sandra Retzer and Dr. Christoph Nedopil.