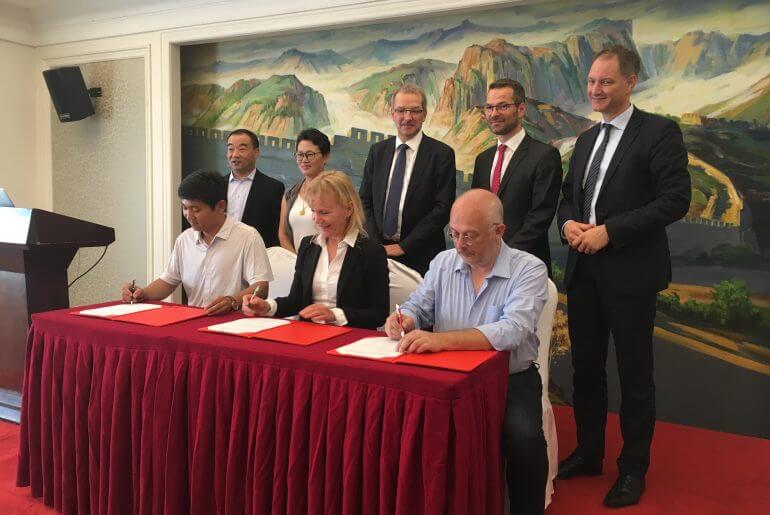 Hydrogen and New Energy Cooperation between Zhangjiakou and Brandenburg

Hydrogen is not only a means of storing energy, but also a valuable resource that can fuel transportation vehicles and can be used in various production processes. As the pioneers in this area, both Hebei Province in China and the state of Brandenburg in Germany hope to develop their new energy economy by establishing a closer cooperation with each other in the hydrogen industry. From 11 to 14 September 2018, a delegation from the state of Brandenburg led by State Premier Dr. Dietmar Woidke visited Hebei Province and hosted the workshop “Hebei-Brandenburg Conference on Renewable Energies and Hydrogen” in the city of Zhangjiakou.

Organized by Brandenburg Invest, the workshop offered a platform to present projects and companies working on sustainable energy in China, Germany and worldwide, as well as opportunities to explore potential bilateral cooperation between companies and institutes from both countries. In the opening remarks, Ms. Li Hong, Vice-Mayor of Zhangjiakou and Mr. Hendrik Fischer, State Secretary of the Ministry for Economic Affairs and Energy in Brandenburg, introduced the new energy industries of Zhangjiakou and Brandenburg respectively. Both Zhangjiakou and Brandenburg have made great efforts in renewable energy, especially in hydrogen energy. Zhangjiakou is the only “renewable energy demonstration area” approved by the Chinese State Council, and rich in wind energy. Prompted by concerns of climate protection and the planning of the Winter Olympic Games in 2022, Zhangjiakou has deployed many renewable energy projects, such as hydrogen production through wind power and a project focusing on fuel cell buses. Brandenburg has traditionally been rich in coal and provides 10% of Germany’s total power capacity. In recent years, however, Brandenburg has been pursuing a transformation of its energy structure by developing its renewable energy sector. The transmission of new energy, intelligent control system and grid integration are the main challenges to be worked on. Based on this shared mission, Zhangjiakou and Brandenburg show numerous cooperation potentials.

Professor Yang Yongping, President of North China Electric Power University (NCEPU), introduced the efforts that NCEPU has made towards the energy transition in China. Early in 2007, NCEPU built the first renewable energy school in China, which produces some of the most advanced research in China on new energy, especially in the fields of smart wind power generation, the application of solar energy, biomass and waste treatment.

Following these two presentations, the two Presidents signed a Memorandum of Understanding (MoU) on behalf of their universities. Under this new framework, BTU and NCEPU start a comprehensive cooperation in new energy areas, combining industry, academia and research and development. Besides this MoU, Chinese Hebei Construction and Investment Cooperation and German Mcphy also signed an MoU for the construction of a Hebei-Brandenburg Hybrid Power Plant in Guyuan.

Mr. Liu Chang, technical advisor in the Sustainable Transport sector at Deutsche Gesellschaft für Internationale Zusammenarbeit (GIZ) GmbH in China, introduced two GIZ projects on energy transition. Firstly, he presented the project “Mobility and Fuels Strategy as a Contribution to the Transport Transition in Jing-Jin-Ji region”, which focuses on the transition from traditional fossil fuels to clean and renewable fuels in the transport sector of the Jing-Jin-Ji region. The project mainly works on the topics of green ports, fuel cell electric vehicles, and policies for clean fuels in road transport. After that, Liu Chang presented the project “German Energy Transition Expertise for China”. In this project, GIZ offers technical support to the China National Renewable Energy Center (CNREC) and jointly with CNREC compiles the “Annual China Renewable Energy Outlook”.

German think-tanks in the hydrogen industry also presented their views in the workshop. The National Organization Hydrogen and Fuel Cell Technology (NOW), owned by the federal government of Germany, is responsible for the implementation of the National Innovation Programme Hydrogen and Fuel Cell Technology (NIP). Dr. Geert Tjarks, Division Head of International Cooperation at NOW, presented his thoughts on the industrialization of water electrolysis in Germany. Dr. Tjarks argued that water electrolysis is the key for an integrated energy system and by producing hydrogen provides feed stock to produce synthetic fuels. He pointed out that the key of industrializing water electrolysis lies in the reduction of hydrogen costs and suggested that governments should exempt levies on green electricity for electrolysis. In addition, he also argued for an accelerated expansion of production capacity.

The German Hydrogen and Fuel Cell Association (DWV), as a mouthpiece of more than 100 companies and research institutes in the hydrogen industry, is engaged in energy policy and business. Werner Diwald, president of DWV, presented the following uses of hydrogen in renewable energy systems:
• Enabling large-scale renewable integration and power generation;
• distributing energy across sectors and regions;
• acting as a buffer to increase system resilience;
• decarbonizing transportation;
• decarbonize industrial energy use;
• helping decarbonize building heating and power;
• serving as feedstock, using captured carbon.
Mr. Diwald concluded with a positive outlook on the future development of the hydrogen industry. With the development of the fuel cell and electrolysis industry, as well as the establishment of a cross-sector hydrogen economy, he predicts a hydrogen market of more than 2.5 trillion dollars and the creation of more than 30 million jobs by 2050.

State Premier Woidke concluded by expressing his appreciation of the achievements of the workshop and wished that both sides can enhance their relations to put forward further cooperation in the future.