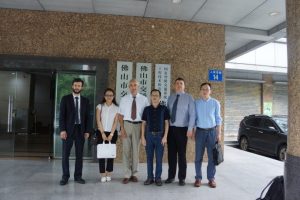 Cities in China are continuing to suffer from heavy and often slow traffic. According to China Daily, Jinan, Beijing and Harbin are China’s three most congested cities. Jinan traffic, for example, only has an average speed of 21.12 km/h during rush hour. With increased commute times and greenhouse gas emissions, the external costs of traffic congestion are increasing.

However, neither the provision of additional road infrastructure nor the development of new car technologies alone can overcome these challenges. Thus, in 2011, the Ministry of Transport (MoT) initiated the Transit Metropolis Programme. Its goal is to promote public transport in cities through better service, more complete infrastructures, efficient management and strong support from local governments. Within that framework, city governments and decision makers have become increasingly interested in how to establish accessible and affordable public transport services and how to create more livable cities.

In support of these efforts, GIZ has been advising the City of Foshan since 2015 on improving the existing transit alliance on district level and on establishing an integrated city-wide transit alliance system. The goal is to provide integrated high-quality transit services to citizens in a cost-efficient manner which at the same time improves the economic viability for operators. Together with experts from traffiQ, the transit alliance of the city of Frankfurt, and KCW, a consultancy for road and rail-bound public transport, GIZ organized trainings and conferences about lessons-learnt of transit alliances, contract-based transport services and public transport financing to key stakeholders. Based on the learnings, GIZ adapted the Sustainable Urban Transport Project (SUTP) Sourcebook Module 3f, “Public Transport Integration and Transit Alliances”.

The paper summarizes the key findings of the workshops and training sessions between Chinese and German public transport experts. It also outlines further questions and options for the development of a transit alliance system with a holistic approach in Foshan.

Foshan is located in central Guangdong Province in southeastern China. The entire prefecture covers 3,848 km2 and had 7.65 million permanent residents in 2017. Over the past thirty years, Foshan recorded significant economic growth with an average annual GDP growth rate of 16%. With increased economic growth, the urbanization rate reached 95% in 2017, while the average urbanization rate in China was 58.5%.

These two factors – economic growth and urbanization – boosted travel demand and personalized travel experiences. However, the public transport network of Foshan with its low service quality could not satisfy the diversified travel demand. Rather, private passenger vehicle population increased from 0.475 million in 2007 to 210 million in 2017.

Public transport in Foshan developed in several stages that reflect the dynamics of state-market interactions. Before 1997, there was only one state-owned bus company to provide urban transit services. To stimulate the public transport market, the Foshan municipal government then introduced a market-oriented approach in 1998. In this system, operators needed to pay a certain amount of money to the municipal government to operate bus routes. By 2007, there were 13 private companies operating transit services in the city.

However, this system incentivized transit service operators to only operate profitable bus corridors, while areas with less public traffic demand and thus lower profitability did not see many bus lines. As the municipal government gradually shifted their understanding of public transport towards a basic public and social service, the government changed tune again: Starting in 2008, Foshan introduced a transit alliance concept, which they call “transit community” or “TC”. It has the goal to balance public service and market-oriented operations of public transport. The TC system was piloted in two districts in the municipality and was then applied to all districts. In contrast to other Chinese cities, Foshan thus adopted a decentralized scheme with its TC, with each of the subordinated five districts operating its own TC system. While this created problems for cross-district travelers, it also enabled Foshan and its counties, towns and villages to adapt and modify policies to suit local conditions, especially with regard to land markets, specialized market clusters and local social services.

From an administrative perspective, the Foshan TC is structured into three levels: 1.  government transit agency; 2. TC management company and 3. operators (see Figure 1). This contrasts with the previous model, where the government directly sold commissions to bus companies.

Each layer has its distinct responsibilities: The government transit agency provides strategic directions on the transit services on the region. The TC management company implements instructions to tender and monitor transit services, collects the fares from passengers and pays the operators based on a contract-based agreement. Lastly, the transit operators provide required services based on agreed quality standard and get paid in accordance.

The concept of transit alliances is relatively new for Chinese cities, but it will likely play a bigger role in the future. The experiences in Foshan will guide this development in multiple areas. Through the workshops and trainings, the following areas for improvement were identified:

The TC system in Foshan is still evolving. Currently, the three-level transit alliance system seems well suited for the separation of fare determination and operational costs. But, it is critical to continue defining the responsibilities, especially between the government transit agency and the TC company. In order to exploit the benefits of both detailed local knowledge on district level on the one hand and an integrated citywide transport planning approach on the other hand, a transparent exchange on equal terms between the citywide TC and the district TCs would be beneficial. Such communication should aim to identify the most advantageous allocation of responsibilities.

A profound analysis of origin and destination traffic across the city is required to map out intra-district and inter-district traffic. A citywide assessment is a prerequisite to understand transport demand behaviour across the districts and is further necessary to develop a multimodal transit network across district borders. This will enable the TC to provide integrated services.

The specification of service, planning and quality standards shall provide a framework to guide the decision-making process on the political, management and operational level. The Foshan metropolitan area is a region with significant momentum and development. Nonetheless, it is necessary to establish long-term goals within the above-mentioned categories in order to enhance a strategic development of the public transport system. Because of the vast city and traffic development, some standards shall be subject to mid or short term revision, if circumstances indicate so.

Monitoring of key input- and output-related parameters is a vital source of information to adjust and develop the public transport system as well as to report to political stakeholders. A city-wide system integration would be advantageous in order to establish a comparable database across districts and thus a helpful source to support the decision-making process on all levels.

Financing local public transport is often not only based on collecting fares, but on public sources. As investments and operations are often long-term decisions (including the commissioning of operators through TCs), it is crucial that financial budgets are predictable. Therefore, it is helpful if the local government establishes a mechanism on the provision of funds that provides transparency and financial sustainability.

In Germany, for example, public transport is seen as service of general interest, where subsidies based on general taxes substantially contribute to cover investment and operational cost. The German system relies on budget allocations that are negotiated for long-term periods with the federal government, federal states as well as with municipal authorities. In this system, operational subsidies for public service contracts (PSC) and funds that are earmarked for infrastructure investment are separated, also since operational subsidies require a rather continuous level of financial resources whereas investments don’t follow a steady course.

In making public subsidy decisions, it is vital to limit these subsidies to levels that are acceptable from the point of view of political decision makers and the general public, who contribute to the system through the taxes they have to pay, while maximizing commercial revenues.

For more information, please refer to the SUTP Sourcebook.