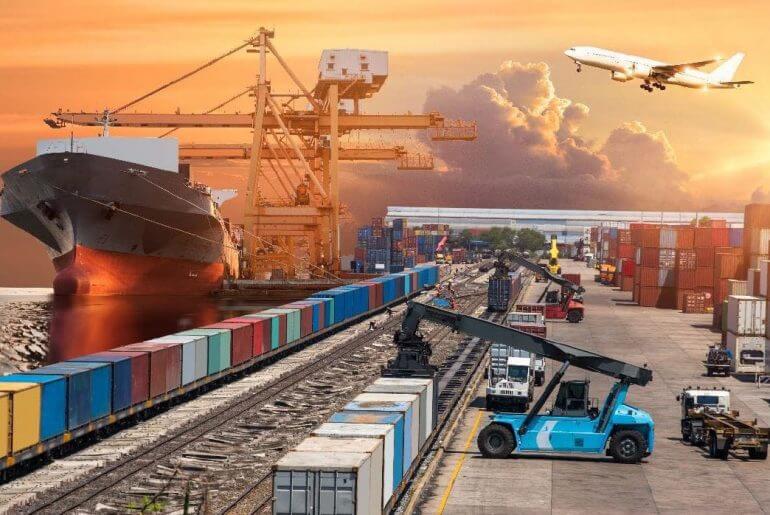 On December 9 and 10, 2019, GIZ together with the China Academy of Transportation Sciences (CATS), the China Federation of Logistics & Purchasing (CFLP) and CHN Energy held the 2nd Sino-German Intermodal Transport Forum in Beijing. The forum, with about 500 participants brought together policy makers and experts in the field of Intermodal Transport. It facilitated knowledge exchange on how to develop and optimize the Intermodal Transport system in China, and how to effectively apply technological and digital solutions.

The development of Intermodal Transport in China is still in an early stage and faces problems such as:

In particular the standardization of Intermodal Transport is crucial for effectively promoting sustainable and low-carbon freight transport. This includes the standardization of facilities, equipment, information and services. In a side workshop to the forum, GIZ together with Mr. Ralf-Charley Schultze of the International Union for Road-Rail Combined Transport (UIRR) and Mr. Steffen Nestler of the Deutsche GVZ-Gesellschaft (DGG) held in-depth discussions with MoT and CATS on the European and German frameworks for Intermodal Transport and the potentials of their application to China.

The following overview on the European and German frameworks for intermodal transport is a result of the 2nd Sino-German Intermodal Transportation Forum and workshop and was conducted by Mr. Ralf-Charley Schultze and Mr. Steffen Nestler.

1. Overview on the European framework for Intermodal Transport

All standardisation starts with a common definition. In the glossary of terms of the UNECE, only Multimodal, Intermodal and Combined Transport are clearly defined:

The following European policies and regulations apply for Intermodal Transport:

The following European policies and regulations apply for Intermodal Transport:

In Europe there still are some challenges regarding the funding (funding schemes are CEF, H2020 and Shift2Rail) and the enforcement side. Among the other challenges, there are physical, technical and regulatory bottlenecks and an issue with the density and productivity of Intermodal Terminals.

In Germany are more than 150 intermodal terminals in operation. Some of them operated as singular transfer facilities. Others are part of freight hubs such as freight villages or inland and sea ports. Although Intermodal Transport accounts only for a rather small share of the total freight transport market, it is the market segment for railway and inland shipping companies with the highest growth rates because it enables them to react on the specific requirements of modern logistics chains such as less than block train goods flows or shorter lead times and provides multi-user access for the majority of transport and forwarding companies which have no individual own rail sidings or port facilities. In 2017, about 79 % of Intermodal Transport (87,8 million tonnes) was carried by rail, 21 % by inland waterway (23,7 million tonnes).

Intermodal operators acquire from the railway companies the traction needed to ship their loading units and then they commercialise the overall service to the end customer. The service comes in two forms: Either it is terminal to terminal (type 1) and the road carrier delivers and receives the loading units at the terminals (pre- and post-shipment) or it is a door-to-door transport from the loader to the customer (type 2).

As far as Intermodal Transport with inland waterway is concerned, the transport organisation is slightly less complicated as the issue of interoperability in international transport is not relevant as the ships operate between countries without legal limitations or technical restrictions. But again, the roles of the intermodal operator and of the terminal operator are as essential as in the road-rail Intermodal Transport chain.

Within the systems of the several transport modes (road, rail, inland waterway) exist several configurations in order to connect origins and destinations of Intermodal Transport chains. In this document the available technologies for intermodal services in Europe are introduced. They are differentiated according to their technological characteristics.

With so called point-to-point or shuttle services exactly one transhipment is necessary at each end of a journey with one fixed train or ship configuration. Therefore these shuttles have generally the highest attractivity in terms of market acceptance of Intermodal Transport. Nevertheless, the basic condition for shuttle service is a sufficient transport demand between the departure and arrival terminal. For example, intermodal rail services typically require an average utilization of some 85 % of a train with 30 wagons and at least two to three round trips per week.

If this condition cannot be fulfilled, additional traffic flows can be integrated with so called liner train concepts with multiple stops within one transport route. These multiple stops can either be carried out with a fixed set of wagons stopping en route for loading and unloading of ITU’s. Alternatively, several wagon groups can be coupled or uncoupled during the stops. The disadvantages of both constellations are the extra time and cost to be consumed for shunting at the stops and the technological interdependences generating risks for delays. The complications increase if the total time window for the liner train service can not be limited to the night time but will also interfere with passenger services in the early morning or in the later afternoon. In these cases the risk of delays increases significantly as priority is given to passengers services so intermodal train may become subject to long breaks for extra waiting.

An important technological instrument to establish attractive intermodal services on a multitude of routes is the so called gateway concept. This concept is usually applied to connect national feeder services to international routes. A typical example for an intermodal gateway is the terminal Munich where trains from all over Germany feed in and ITU’s are transshipped between those national trains and shuttles to gateways in Italy like Verona which again offer a variety of national intermodal services. So, gateways can function as funnels for the consolidation of traffic flows.

A special derivation of the gateway scheme is the hub-and-spoke concept. Comparable to similar concepts in air traffic or road transport, intermodal hubs are located at geographically central points, where they act not only like funnels for international services but also as interchange points for national transport services. One essential advantage is that also those terminals can be connected to the hub which do not generate the minimum traffic flows for shuttle or liner trains. So, the train into the hub can carry ITU’s for a multitude of destinations.

The interchange between trains can be carried out either by shunting of wagons or by transshipment of ITU’s. The crucial point for implementation of hub-and-spoke systems in Intermodal Transport is the throughput time for the trains. One innovative hub approach is under construction in the freight village Hanover in Germany. The interchange will be carried out through transshipment of ITU’s with several gantry cranes with a high throughput capacity.

The transfer of the loading units at each end of the rail journey of a combined road-rail transport chain can be accomplished by the use of several handling techniques. One characteristic distinction for these
techniques is the main direction of the handling movement. It can be undertaken either vertically or horizontally. The vertical lift-on-lift-off operation (lo-lo) is the most widely used form of intermodal transfer. It is applied to the transshipment of ISO containers, swap bodies and semitrailers.

As ISO containers are designed to the requirements of sea transport, they are not optimal for continental transport as – compared to road vehicles – they have disadvantages in terms of pallet wide size or weight. Therefore, also liftable lorry bodies, so-called swap bodies are applied. The third group
of ITU’s in unaccompanied Intermodal Transport are liftable semitrailers.

Containers are usually top-lifted at corner fittings by adjustable Spreaders with twistlocks. Swap bodies and semitrailers are bottom-lifted by so-called grapple arms which fit into lifting pockets at the bottom
side of the loading units.

All three ITU’s are common in intermodal rail services. Containers and swap bodies are placed on platform wagons for rail transport which are available in comparatively high quantities all over Europe. On the other hand, liftable semitrailers require special pocket wagons which are in particular rare in rail companies in Middle and Eastern European countries. Therefore systems for lifting non-craneable semitrailers are applied, usually with additional platforms to carry the semitrailer. One of these systems is NiKraSa (see figure below).

ISO containers do not require any specification for intermodal rail transport. On the other hand, semitrailers and swap bodies require an UIC certificate as permission for rail transport and also a reinforced construction for lifting.

Since July 2011, the European standard EN 13044-1 introduces an owner-code for the identification of European intermodal loading units, the ILU-Code, which is compatible with the worldwide BIC-Code used for containers according to ISO 6346. Therefore, only one uniform type of owner codification of loading units will be applied: the worldwide BIC-Code for freight containers and the ILU-Code for European loading units. This enables the simplification of the electronic data processing and
operations of the transport chain. The code adapted to electronic data processing reduces the number of data capture errors as the majority of the possible typing errors are immediately spotted using the check digit. Correction costs for data errors are consequently considerably reduced.

For inland waterway transport ITU’s usually need to be stackable which refers to all ISO containers and a very limited quantity of swap bodies. Although liftable semitrailers could be carried in ships on top a
container stack, this version is not practised.

Horizontal transfer solutions are usually based on transfer equipment integrated either in the loading unit itself or in the rail wagon. Several innovative handling systems for unaccompanied Intermodal Transport are either in operation or in the pilot phase. Examples are the systems Modalohr and CargoBeamer. All systems have a flexible pocket in common which can be moved for ro-ro transshipment of semitrailers.

Although these systems approach the problem of non-liftable semitrailers, investment and construction of the special wagons needs significantly higher efforts compared to wagons for vertical transshipment. Therefore these new technologies can be seen economically viable only for train
services with a high frequency, i.e. a high level of utilization of the wagon material. Another advantage compared to vertical lifting is that the transshipment can be carried out also under the catenary (electrified loading track). The following chart contains an overview of the intermodal units and related handling technologies.

Government support for Intermodal Transport is part of several national strategies such as:

Due to the significant growth rates of Intermodal Transport and the modal shift potential from road to rail and inland waterway, the German government supports the construction of intermodal terminals. Terminal funding is available for state-owned Deutsche Bahn subsidiaries and for private investors. Private investors can receive up to 80% funding for eligible investment costs. The current average budget per year for this investment programme is about 93 million EUR. Since 1998 more than 90 terminals were funded. The modal shift impact of these investments is 28.4 billion tonne-kilometres per year and 2.0 million tonnes carbon emission savings per year. So far, the total Federal Government funding in intermodal terminals is 802.1 million EUR (2017) which established a handling capacity of 8.4 million loading units (2017). Further support instruments and incentives relevant for Intermodal Transport are:

2.6 Standards and specifications on national level

The influence of standards in the Intermodal Transport chain is illustrated in the figure below:

Whereas standards for technical equipment are widely available and applied, a completely standardised data flow and processing in Intermodal Transport is still considered to be a challenge. One approach to solve this problem is the technical standard specification DIN SPEC 91073. DIGIT, defining standard of data exchange between all stakeholders of the Intermodal Transport for efficient communication.