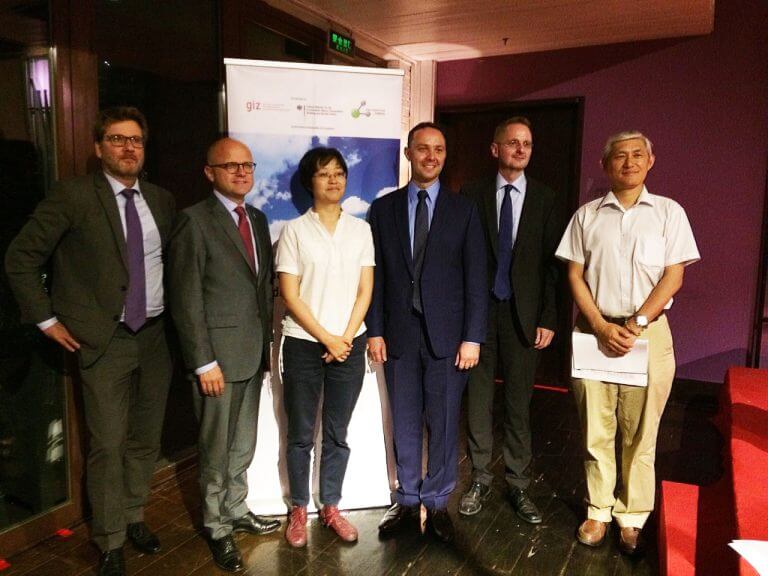 On June 26th, 2017, the Deutsche Gesellschaft für Internationale Zusammenarbeit (GIZ) GmbH, together with the Royal Norwegian Embassy to China and the China Carbon Forum co-organised an event titled “Mitigating transport emissions: European and Chinese perspectives”. The event was part of the China Low Carbon Leadership Network (LCLN), an event series jointly organized by GIZ and the China Carbon Forum since 2010, aiming to encourage communication among leading local and international experts in China’s climate change sector.

The event was opened with a keynote speech by Mr. Vidar Helgesen, the Norwegian Minister for Climate and Environment. Mr. Helgesen began with pointing out that decarbonisation of the transport sector in Norway is a very pressing issue, given the fact that it accounts for about a quarter of Norway’s energy-related greenhouse gas emissions. The transport sector also contributes to local air quality problems, while road traffic poses as a major source of micro-plastic pollution.

Aware of the advantage of having its power generation virtually carbon-free (due to Norway’s strong history of hydropower), the Norwegian government has long been investing in electro mobility to achieve the goal of reducing emission in the transport sector. Mr. Helgesen noted that after 15 years of supportive government policies, further amplified by recent developments in the electric car industry, Norway is now one of the largest markets for electric vehicles (EVs) and has the highest share of EVs per capita globally. By 2025, the government aims to achieve “zero-emissions” in all new cars and public buses sales. In addition, the majority of road freight transport vehicles shall be replaced by greener vehicles by 2030, thus making urban distribution of goods emissions free.

Apart from the road transport sector, Mr. Helgesen also highlighted Norway’s foray in electrifying its maritime and aviation sector. Norway has recently begun to operate its first fully-electric car ferry and is currently developing the world’s first hybrid cruise liner. The government has also established a test area for autonomous shipping, which could further reduce emissions. There is also some early discussion of electric airplanes in Norway, and of the possibility of hosting a pilot project given the number of short distance routes in the country.

Lastly, Mr. Helgesen drew the attention to the EV development in China and its global repercussions. He pointed out that the development of EV technology and its pricing resulting from the adoption rate in China will greatly influence the sector in the coming years, and thus will have direct impact on the achievement of Norway’s climate goals. Other high-tech innovations, such as the smart bike sharing innovation introduced by Mobike, will also complement the pursuit for greener transportation. He closed his speech by emphasizing China‘s important role, particularly in the emerging area of high-tech solutions, in helping the world to meet the goals of the Paris Agreement.

The speech was followed by a presentation on “Decarbonization of Transport in Germany” by Mr. Martin Schmied, Head of the Transport, Noise and Spatial Development department of the German Environment Agency (UBA). In his presentation, Mr. Schmied introduced the German Climate Action Plan 2050, highlighting Germany’s long-term commitment to achieve the goal of reducing overall GHG emissions by 80-95% compared to the 1990 level by the year 2050. The ambitious target translates to an annual carbon budget of about 60 million tons CO2e per year, down from around 1200 million tons in 1990. Taking into consideration the amount of non-avoidable emissions from the industry and agriculture sector, Germany therefore needs to reduce its transport-related emissions down to zero, Mr. Schmied explained.

To achieve the zero-emission goal in the transport sector, the German government launched a two-pronged approach: the transition of transport system, complimented by the transition of energy supply of transport. Mr. Schmied explained that by pursuing ‘avoid, shift and improve’ strategies, emissions can be reduced by 40-60 percent, while GHG mitigation above 60 percent can only be reached by introducing new energy sources for transport vehicles. Electric mobility is the key element of this transition, he remarked.

According to a study by the UBA, battery-powered electric cars can travel 4-6 times as far per unit of energy than conventional cars using other new energy sources such as Power-to-Liquid (PtL) or Power-to-Gas (PtG). The UBA estimates that Germany will need 12 million EVs by 2030 to meet the target of an emission free transport sector.

Mr. Schmied reminded the audience that sustainable transportation has many more facets than a mere carbon emission reduction. Other important objectives include the reduction of local air pollutants, less noise, increased safety, and efficient land use. As a final remark, he stated that transition to an electric mobility-based transport system requires not just the use of electric cars and buses, but also e-bikes, e-scooters and car sharing.

The two speakers were then joined by a distinguished panel of experts, including Dr. Jiang Kejun, Director of the Energy Research Institute (ERI), and Dr. Yin Zhifang from the China Urban Sustainable Transport Research Center of the Ministry of Transport. The panel discussion was promptly followed by a networking event, in which the audience had the chance to follow up with the experts.

The event series is funded by and part of the German International Climate Initiative (IKI). The Federal Ministry for the Environment, Nature Conservation, Building and Nuclear Safety (BMUB) supports this initiative on the basis of a decision adopted by the German Bundestag. The projects Capacity Building for the Establishment of Emission Trading Schemes (ETS) and Sino-German Cooperation on Low Carbon Transport (CLCT) both implemented by GIZ on behalf of BMUB, collaborated to make the event happen.