Over the past twenty years, the Chinese transport sector has undergone a monumental transformation. Today, China is the world’s largest car market, has the planet’s largest High-Speed Rail (HSR) system, is the world’s second largest civil aviation market and houses seven of the planet’s ten largest container ports. An astounding achievement considering the country had under 20,000 registered private cars in 1985 and not a single HSR line until 2008. Simply phrased, China has ‘put the pedal to the metal’.

However, China’s rise came along with alarming environmental and climate change issues as transport emissions have increased more than tenfold since 1980. Today, China is not only the world’s single largest emitter of greenhouse gasses, but its transport sector is the country’s third largest contributor. Furthermore, China is plagued by notorious air pollution that provokes alarming health concerns amongst its 1.4 billion strong population.

With incomes continuing to grow among China’s enormous population, and with the sector’s energy demand being a major source of carbon emissions, the Chinese mobility sector is set to continue its evolutionary pathway. China is showing itself to be incredibly ambitious in transforming the sustainability dimensions of its transport sector, in developing home-grown transport firms and satisfying the ever-increasing mobility demands of its population. With the Chinese state throwing its weight behind the development of a world-class transport sector, the Chinese transport space is throbbing with dynamism and is now a place where innovation has become ubiquitous.

Due to the sheer size of China and its mobility sector, developments in the Chinese transport sector will have reverberations across the world, and the power to dramatically redefine the nature of the global transport industry. These developments will not only prove crucial for combating climate change and the environmental burdens that transport carries but could also provide industrial challenges for countries with well-developed mobility systems and industries such as Germany. 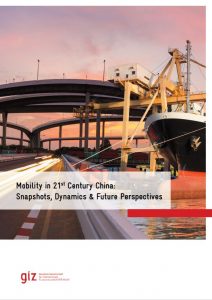