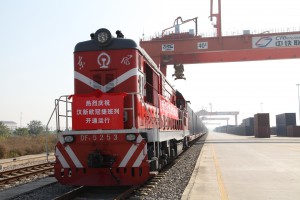 The pressure on policy makers in China to increase the efficiency of freight transport is high. A high dependency of the freight transport sector on imported fuels, major concerns of transport-related air pollution and continuously growing carbon dioxide emissions exacerbate the pressure.

Currently, the freight sector is developing towards an unsustainable direction. The modal share of rail transport halved between 2004 and 2014 while the share of road freight transport tripled. Neither waterway nor rail transport are at this stage competitive to the road sector in terms of speed, flexibility, accessibility and reliability. The rail network is utilized to a large extent to transport mass goods such as steel and coal. Both the infrastructure and railway operation of the railway transport are designed to transport bulk rather than provide intermodal solutions for containers. The consequences are severe: the freight transport caught up with the road passenger sector in terms of energy consumption, 14 million trucks are driving on Chinese roads, one third of all trips are empty runs. Intermodal logistic concepts and logistics alliances are still new grounds for China.

Logistics vocabulary in a nutshell:

Intermodal Transport describes the movement of goods in one and the same loading unit (container or swapbody) or road vehicle, which uses successively two or more modes of transport without handling the goods themselves in changing modes (Source: UNECE  Terminology on Combined Transport).

Freight Villages describe a settlement of transport-oriented companies, logistic service providers and logistic-intensive trade and production enterprises in a commercial area. Freight villages should usually possess an intermodal road/rail or inland waterway/road/rail terminal with open access for any user and make use of the synergy potential of the different sectors.

However, intermodal freight transport gained in significance in national policy making. Several policies and measures were implemented in the past years. A well-known one is the “Belt and Road initiative”. This new “green silk road” is more than a road connection between Europe and China. Substantial financing is granted for the expansion of intermodal rail infrastructure. The objective is to reverse the trend and shift more freight transport from road to rail.

Apart from its effort to “green” international trade the Chinese government has initiated several domestic measures to increase the competitiveness of rail freight transport. The national logistic plan foresees the expansion of a nationwide network of container terminals and freight villages. The Deutsche Gesellschaft für Internationale Zusammenarbeit (GIZ) GmbH supports on behalf of the German Federal Ministry for Environment, Nature Conservation, Building and Nuclear Safety (BMUB) the Chinese Ministry of Transport in developing technical guidelines to facilitate and steer this process effectively.

Improving intermodality requires the cooperation between policy makers, private sector and academia. This is why the transport team of GIZ and the Transport Planning and Research Institute (TPRI) of Chinese Ministry of Transport invited to the “Sino German Intermodal Transport Forum” on June 27-28, 2016 in Beijing.  The interest of Chinese experts was overwhelming. Considerably more registrations were recorded than the 150 seat conference room could accommodate.

Given the high pressure to show rapid results, a lively debate shaped the discussion between freight forwarders, rail operators, administrators and planning authorities during the two-day workshop. Of great interest was the extensive German experience with freight villages, inland ports and cargo handling technologies for intermodal transport.

Clemens Bochynek, CEO of the German Association for Intermodal Transport, presented container types and handling systems in Germany. Only ISO standard containers are currently being forwarded on the Chinese rail network.

Ralf Charley Schulze, president of the International Union for Road-Rail Combined Transport (UIRR), gave an overview on market conditions and the policy framework from the perspectives of intermodal operators. The deregulation of the railway sector in the context of the 1995 railway reform aroused high interest among the audience. Lars Nennhaus, Vice President Port Development at Duisport explained key operational features of the worldwide largest inland port. The Duisburg port is now an established corresponding destination for the EU-China rail connection. Chengdu intermodal logistics park has established itself as a hub for the connection with subsequent destinations in China. The intermodal logistics park in Chengdu has been an early initiative in the context of the Master Plan issued by the German Association for Freight Villages (DGG). CEO Steffen Nestler presented the current development trends of freight villages in Germany and the current involvements of German freight villages such as Nürnberg, Herne or Frankfurt (Oder) in the Chinese market. The focus of the subsequent discussion was on the role and responsibilities of public stakeholders in the planning stages and the conditions for soft loans and subsidies for the construction of transhipment terminals for combined transport.

Leading German logistics enterprises such as DHL and BLG Logistics Group shared their engagement on the intermodal transport and introduced their best practices and intermodal logistics solution. CargoBeamer presented innovative technologies for the handling of non-cranable semi-trailers.

As a pioneer of rail connections between Europe and China, Dong Wanxu, General Magager China of Trans-Eurasia Logistics GmbH (TEL) presented experience and challenges of competing in international trade with the currently dominating maritime transport. Trans-Eurasia Logistics is a joint venture between German and Russian rail companies Deutsche Bahn and RZhD, operating block trains between Germany and China via Russia. Land-connections as an alternative to the substantially longer sea route remains to be the focus of discussion between German and Chinese transport experts. It was seen as an imperative to make use of the current window of opportunity that is offered by the substantial (start-up) investments of the Chinese government in intermodal rail infrastructure and subsidies for the operation of China-EU block trains. The most crucial challenge in this regard is the full utilisation of two-way traffic. While the cargo load factor is satisfactory on the way to Europe, the return trip is still not economically operable. However, encouraging first examples of the automotive components suppliers and the chemical industry might hint towards a promising trend. 39 intermodal rail connections are currently operating between Europe and China. Service frequency and regularity of services are major limitations compared to established sea routes.

In order to tackle these challenges effectively GIZ initiated an international expert panel for intermodal transport. This expert panel will be supported by the Sino-German Cooperation on Low Carbon Transport in the context of the international climate protection initiative of BMUB.

Regular “one belt one road” rail connections between China and Europe:

For more information please refer to the following downloads