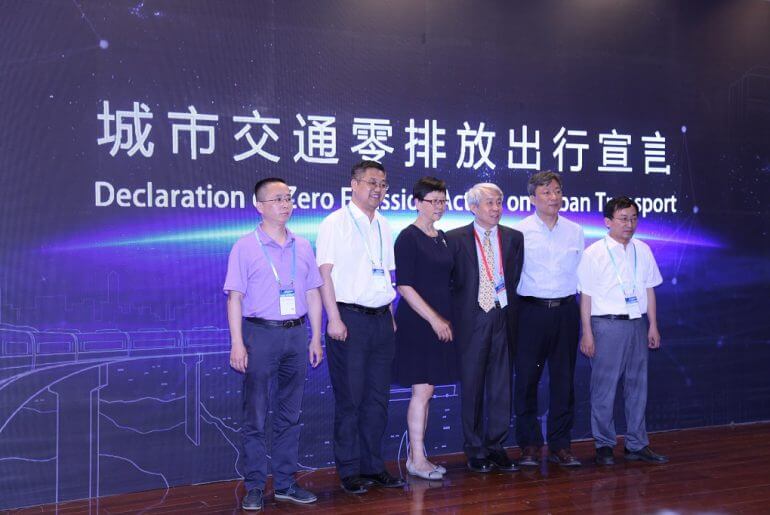 In order to reduce emissions and to boost industrial upgrading in the transport sector, China Academy of Transport Science (CATS) and the Asian Development Bank (ADB) jointly organized the 2nd International Forum on Zero Emissions of Urban Transport from 28 to 29 May 2018 in Beijing.

China has made great efforts to promote New Energy Buses (NEB). In 2017, China introduced more than 100,000 new buses, 93% of which were NEBs. In light of this dynamic development, experts in the sectors of public transport and NEVs reviewed the status quo and relevant subsidy policies during the workshop. The participants also exchanged suggestions on possible policies for the promotion of NEBs. The development of NEBs has reduced the emissions of greenhouse gases dramatically and relieved pressure on the urban environment. Li Cheng, Associate Research Fellow from CATS, illustrated that the promotion of NEBs saved more than 1.3 million tons of diesel oil, which is equivalent to the fuel for 121,000 conventional buses per year. It also reduced CO2 emissions by 4.2 million tons, which is equivalent to what 23 million trees absorb per year.

Wang Jian, Professor at Chongqing Jiaotong University, said that subsidies favor BEBs (Battery Electric Buses) with large battery packs. However, sometimes public transport companies prefer to purchase NEBs with small battery packs because of short operational lines. Therefore, the government should consider subsidizing NEBs based on practical circumstances rather than its own preference. Professor Wang Jian also highlighted that, in comparison to Western countries, China’s incentives to promote NEBs are not only environmental protection and emissions reduction, but should also be seen as an industrial policy tool for upgrading the automotive industry.

On the technical side, fuel cell buses and fast charging techniques were further highlights of the conference. SinoHytec, a company focusing on fuel cell motors, introduced their fuel cell bus demonstration project in Zhangjiakou. The company proposed that fuel cell and battery hybrid electric buses could be the solution for NEB in the future. TGOOD, a charging infrastructure company, showed its fast-charging system, which is usually installed in bus stops. The NEBs can drive 10 kilometers for every 40 seconds of charging.

Mr. Liu Chang, technical advisor at the GIZ project ‘Mobility and Fuels Strategy as a Contribution to the Transport Transition in China’, presented the status quo of the development and the promotion policies of NEBs in Germany. He introduced four NEV development programs supported by the German federal government and a series of NEB pilot projects. His presentation showed that through closer cooperation on NEBs, China and Germany could mutually benefit from the promotion of sustainable transport in their respective countries.