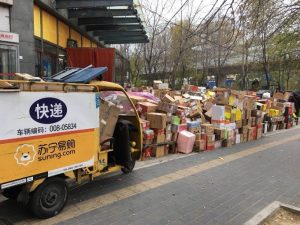 Singles Day in China, the biggest shopping festival in the world: a challenge for the environment

On 11 November 2018 Chinese e-commerce volume reached more than 27 billion EUR, on a single day by a single retailer – Alibaba. This is more than half of Germany’s overall e-tailing in one year, which is expected to be 53.6 bn EUR in 2018. Adding other online-shops to the statistics, the total sum spent in Chinese e-commerce on that one day will probably be about as much as Germany’s yearly e-commerce volume (JD.com sold about 20 bn EUR worth of goods).

The so called Singles Day, or Double Eleven (Shuangshiyi, 双十一) or also „chop-off-your-hands-day“ (in order to stop shopping) happens on 11 November. The four 1s could be understood as singles, which is one of the stories of the origin of Singles Day. It has become  the biggest shopping event in the world., dwarfing its American equivalent – Cyber Monday – which reached sales of 6.59 bn USD (about 5.75 EUR) in 2017 – a number reached in 30 minutes in China in 2018.

Alibaba launched the shopping festival in 2009, potentially as a way to overcome the sales-slump between the Chinese National Holiday at the beginning of October and Chinese New Year in late January or February. In its first year, it sold about 6 million EUR worth of goods. Only one year later, in 2010, other companies, notably JD.com, joined the fray to offer discounted groceries and cosmetics, electronics, cars or hotel nights to its customers on this day. In a close race, Alibaba with its marketplaces Taobao and Tmall could retain the lead in luring customers to shop online on that one day, increasing its sales over the past 10 years (CAGR) by 113.05% every year.

This development required not only heavy investment in IT infrastructure to handle billions of transactions, mostly online payments through Alibaba’s own Alipay system, but also investment in logistics. In 2018, 1.35 billion deliveries had to be delivered for 11/11 in China, which is equivalent to about 80% of DHL parcel deliveries in Germany in a year. Alibaba’s own logistics provider Cainiao handled about 1.04 billion packages, and chartered 51 flights to Western Europe, Russia and South East Asia to deliver to its increasingly international shoppers during 11/11. To better manage commissioning and packaging, Cainiao has invested in automated warehouses, for example in the city of Wuxi – in the Eastern Part of China, where 700 robots fulfill the orders (a video can be found here).

The shopping frenzy was also clearly visible on China`s streets, with packages piling high waiting for their rightful owners.

The environmental impact of the packages itself is, however, serious. In 2017, Chinese news outlet Xinhua reported that waste facilities in Beijing could not handle the packaging waste of 11/11, when a total of about 300,000 tons of packaging waste was created from that event. Greenpeace estimated that the 2017 Singles Day generated an additional 52,400 tons of CO2 emissions.

Ideas how to make deliveries greener and deal with packaging waste have been discussed: China’s State Post Bureau announced in 2017 that by 2020, packaging material should per package should be cut by 10% and half of all external packaging should be degradable. Suning, another retailer in China, has promised to introduce 200,000 reusable yellow plastic boxes for delivery in 2018, which, if used 1,000 times, would reduce waste of about 200 million cardboard boxes. Also, Alibaba promised to recycle cardboard boxes in 10 Chinese cities (including Beijing, Shanghai and Guangzhou) and encouraged its users to return the packaging materials at designated distribution centers or had delivery vehicles pick them up.

The Ministry of Transportation (MOT) has also taken actions to tackle the challenges of green urban deliveries – challenges that are reaching further than 11/11. The MOT supports logistics operators and government institutions in 22 pilot cities, including Beijing, Shenzhen, Guangzhou, and Chengdu in developing less polluting means to deliver the increasing amount of express deliveries. GIZ is supporting this work, for example by co-organizing the workshop on green urban delivery in Chengdu in September 2018 with international experts from the UK and Japan. However, in order to lower the environmental impacts of “shopping festivals” like 11/11, an even more coordinated effort needs to take place for recycling as well as efficient delivery.