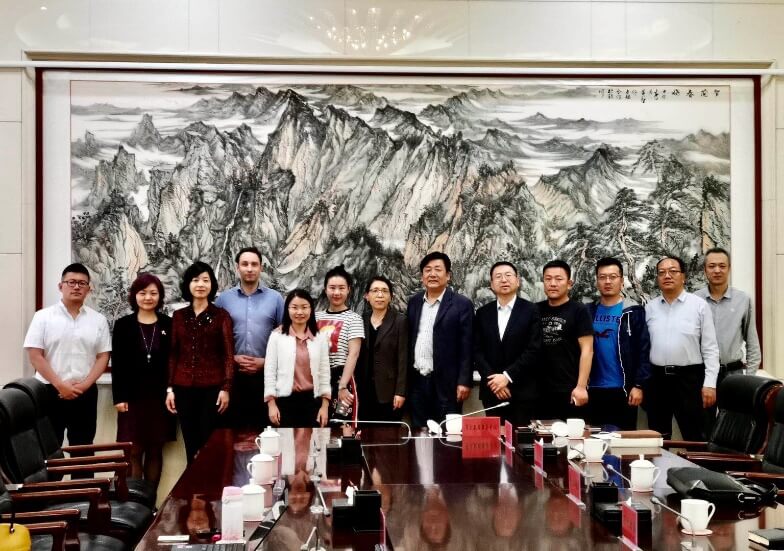 Systematic and integrated transport planning is key to achieving low-carbon transport systems in cities. Sustainable Urban Mobility Planning can help cities to overcome institutional barriers by shifting from comprehensive transport planning with a focus on infrastructure towards integrated and climate-friendly mobility planning.

On 25 April 2019, GIZ, together with the Institute for Environment and Sustainable Development (IESD), the Yinchuan Development and Reform Commission, the Yinchuan Foreign Affairs Office, and various local government departments, jointly organized a one-day technical workshop in the Chinese city of Yinchuan on the concept of SUMP. The aim of the workshop was to jointly elaborate on how SUMP can contribute to a more sustainable development of Yinchuan’s transport and mobility system and to conduct an in-depth exchange on the status quo of Yinchuan’s transport system and its future development pathway.

Yinchuan, a forerunner in innovation and sustainable urban development

Yinchuan, the capital of the Ningxia Hui Autonomous Region in north-western China, is the economic centre of Ningxia. With a population of 2.25 million and a GDP of more than 190 billion RMB (more than half of the province’s GDP); it is home to an advanced transport and infrastructure system. The ambition to foster low-carbon and smart city development makes Yinchuan a focal point for transport and mobility innovation. Nevertheless, Yinchuan faces the same challenges as other large cities: rapidly increasing transport volumes in passenger transport and urban freight and thus increasing congestion, air pollution and greenhouse gas emissions. To tackle these challenges, the city has high ambitions to improve its urban transport system and participates in various city initiatives and national-level projects related to sustainable development.

After the opening speech of Li Yanli from the Yinchuan Foreign Affairs Office, Sebastian Ibold (GIZ) provided an overview on the status quo and trends of climate-friendly transportation in Germany. Ding Yan (GIZ, freight and logistics) provided insights on how the application of Intelligent Transport Systems (ITS) can benefit to improving traffic management. Wu Yingjie (GIZ, urban transportation) then introduced the concept of SUMP and explained how this concept could contribute to further improving Yinchuan’s local transport and mobility systems by better integrating public transport and shared mobility system planning. After the technical inputs from GIZ, Dr. Duan Hongxia, Director of the Institute for Environment and Sustainable Development (IESD) elaborated on the role of urban transportation for the implementation of China´’s “Blue Sky Action Plan” and the Paris Agreement, stating that the transport sector is of high importance to decarbonise transport.

Following the presentations held by GIZ and IESD, representatives of the city’s Municipal Transportation Bureau, the Science and Technology Bureau, Natural Resource Bureau, Ecological Environment Bureau, City Housing and Construction Bureau, Big Data Service Center, and the Investment Promotion Bureau provided a comprehensive overview on the city´’s future urban and transport system. To achieve the overall goal of green and low carbon transportation, Yinchuan aims at further expanding and improving its public transport system, which currently mainly relies on public buses. In addition to the bus system, two light rail lines will be opened to the public in the next years. To improve regional and domestic connectivity, a newly build High-Speed Rail (HSR) line will connect Yinchuan to the cities of Xi’an and Baoding by 2020. Besides basic infrastructure expansion, Yinchuan aims at further enhancing its big data-based smart city system to improve transport efficiency and promote new mobility services such as car-sharing or ride-hailing as well as non-motorized transportation.

By its development strategy 2016-2030, Yinchuan aims at further expanding the urban area towards the North and at completing its newly build Central Business District (CBD). Of particular importance for the city’s urban growth strategy is the sustainable integration of the rich local water resources (wetlands and canals) into the urban public space and ecological planning.

Big data plays an important role in Yinchuan’s urban planning: In a big data centre, technical systems and existing applications of big data in smart and low-carbon transport operation enable the authorities to improve local transportation by measures such as dynamic lane management based on real-time traffic data assessment.

Yinchuan is also home to the BYD Skyrail, one of the first monorail lines in China. With a total length of 6km, the Skyrail serves tourists exploring the city’s garden expo area. Currently, the city is conducting research on whether the Skyrail system can become an integrated part of Yinchuan´’s future urban transit system.

Serving about 76,000 passengers daily, buses are already an important component of Yinchuan’s transport system. By end of 2018, the city had a total of 2,100 buses in operation, comprising 615 battery-electric and 1,485 Compressed Natural Gas (CNG) buses. Operating on 137 bus lines (including one BRT) with a total length of 2,400 km, the total operation distance is about 90 million km per year. Nevertheless, the city aims at further increasing the modal share of public transportation and in particular the bus by optimizing route efficiency, service levels, and Big Data based planning and operation.

After the workshop, the city expressed that cooperation with GIZ on the promotion of low carbon transportation is highly desired and that, in particular, the application of SUMP can significantly contribute to the integrated and sustainable development of Yinchuan’s transport and mobility system.

The project Sino-German Cooperation on Low Carbon Transport (CLCT), commissioned by the German Federal Ministry of Environment, Nature Conservation and Nuclear Safety is part of the International Climate Initiative (IKI). After more than four years working together with the Chinese Ministry of Transport and various implementation partners on strategies to effectively mitigate carbon emissions in the transport sector, the project has been extended until July 2022. Besides further deepening cooperation on the topics of intermodal freight and public transportation, new topics such as green urban delivery transport, new mobility services and SUMP will be the focus of the next project phase.