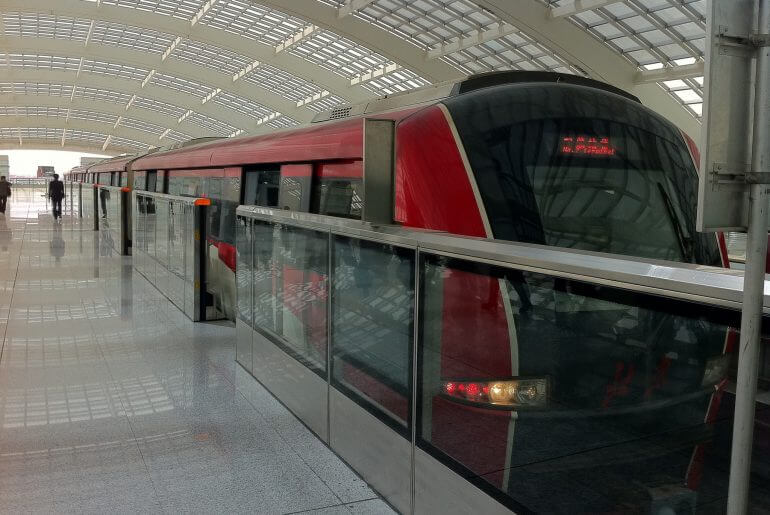 There is justified admiration for the scope and speed of China´s construction of its public transportation infrastructure as a form of green urban transportation. In this short article, we want to shed light on the development and status of public rail network in Beijing and Shanghai by comparing their subway infrastructure to the urban public rail infrastructure of the two German cities Berlin and Munich. On first glance, Beijing and Shanghai have over the past years strongly outperformed the two German cities when considering the growth and length of the subway network (see Figure 1).

However, as this short article shows: despite the rapid growth from just one subway line with just a bit more than 40 km in length in the 1990s in both Chinese cities to today`s combined 1200 km, there is still need for further development which both cities are working hard on.

Short history of the urban rail systems in Beijing, Shanghai, Munich and Berlin

Beijing started constructing its subway (北京地铁) in 1965 when less than 4 million people were living in the city. Shanghai meanwhile built its first subway line (上海地铁) in 1993, at a time when the city counted about 9 million people. Since then, both cities not only grew their populations to more than 20 million inhabitants each; both cities also expanded their metros to become the longest (Shanghai) and second longest (Beijing) subway networks in the world with a length of 650km and 550km connecting 382 and 339 subway stations respectively. Figure 2 shows Beijing`s and Shanghai`s population growth and its subway network length from 1975 to 2015. Figure 3 shows the development of Beijing`s and Shanghai`s subway network length and number of stations from 1975 to 2015.

The history of public rail transportation in both Munich and Berlin goes back about 150 years. Berlin built the first horse-pulled tram in the world in 1865. Subsequently in 1881, Berlin started operating the world`s first electric tram. Berlin opened its first subway in 1902 and within 30 years built around 100 subway stations. Munich had its first electrified tram in 1895, but it took the city until 1972 to open underground public urban transportation (during the Munich Olympics).

Contrary to Beijing and Shanghai where public rail transport is dominated by subways (with the exception of Beijing`s airport and Xijiao line as well as Shanghai`s maglev), Berlin and Munich offer a wider array of urban passenger rail options:

For the purpose of this article, we only look at subways and suburban rails in Munich and Berlin (i.e. we leave out the trams), when comparing it to Beijing`s and Shanghai`s subway system. Today, Munich has built around 200km of subway and S-Bahn tracks for its 1.5 million urban inhabitants (about twice as much for its metropolitan area).  Berlin boasts around 400 km of tracks for its 3.6 million people living in the city (without the metropolitan area).

Figure 4 shows the development of Berlin`s and Munich`s population and urban rail system from 1975 to 2015.

With the impressive expansion of Beijing´s and Shanghai´s metro system particularly over the past 15 years, a question that often gets asked is, whether China`s urban metro system is becoming the yardstick of subway systems. People tend to look at the length of the subway network and often are impressed how Beijing and Shanghai overtook the hitherto longest subway networks in New York or London in such a short time.

However, as length in itself is not the best yardstick of the public rail transportation quality, we analyzed in a simple first step how Beijing and Shanghai are comparing in terms of relative accessibility. Particularly we wanted to understand how big the average “catchment” area per subway station as well as per urban rail network kilometer is and how many people share one subway station in the four cities. For this analysis, we used all types of urban rail transport in Beijing and Shanghai (except the maglev train) and the U-Bahn and S-Bahn in Berlin and Munich. As mentioned above, we left out trams (with 172/808 stations and 82km/296km of network length in Munich/Berlin), and other rail-based public infrastructure of the two cities (e.g. regional trains that also connect different parts of the cities).

The catchment area per subway station in our simple analysis is the average urban area that one subway station serves (other, more complex definitions for catchment area that also include urban density or accessibility can, for example, be found here: https://www.witpress.com/Secure/elibrary/papers/UT08/UT08017FU1.pdf). For better comparison of the the urban area of Beijing and Shanghai, we used data from The Atlas of Urban Expansion (http://www.atlasofurbanexpansion.org/), while for Munich and Berlin, we could use the official city data. The data show (see Figure 5) that despite the rapid expansion of the subway system, the average catchment area in Beijing is still about 14 square kilometers for Beijing and Shanghai, compared to 2.6 square kilometers for Berlin and Munich with 1.24 square kilometers.

As a final measure, we analyze the average ratio of inhabitants per urban rail station in 2017. We find that on average about 50,000 inhabitants in Beijing and about 61,000 inhabitants in Shanghai had to share one subway station. In Berlin this number is about 14.600 people and in Munich only 11.500 (see Figure 7).

While the current numbers indicate that more people in Beijing and Shanghai have to share one subway station, we also want to highlight the impressive development of that ratio over time: Figure 8 shows the development of the ratio of inhabitants per urban rail station in Beijing, Shanghai, Berlin and Munich from 1975 to 2015. While the two German cities could keep their ratio constant at about 9 to 10.000 people per station, Beijing and Shanghai could – despite the 1.5x growth in their respective populations – cut the ratio of people per subway station by three, from more than 180.000 inhabitants per subway station to about 60.000 in just 10 years.

Conclusion – This is not the end

On the three quality measures of urban public rail accessibility that we used for this short article, Berlin and Munich still have a clear edge over its two Chinese counterparts. However, with both Beijing and Shanghai planning to almost double their subway networks in the next 5 to 10 years, there is no end of catching up in sight. Rather, Beijing and Shanghai could over the next years overtake the two German cities in terms of accessibility of its subway network.

In order to better understand the catching-up of Chinese public urban infrastructure, we want to emphasize that many other measures also play an important role to determine the quality of a public rail system, such as frequency of trains, safety, comfort, profitability, accessibility.