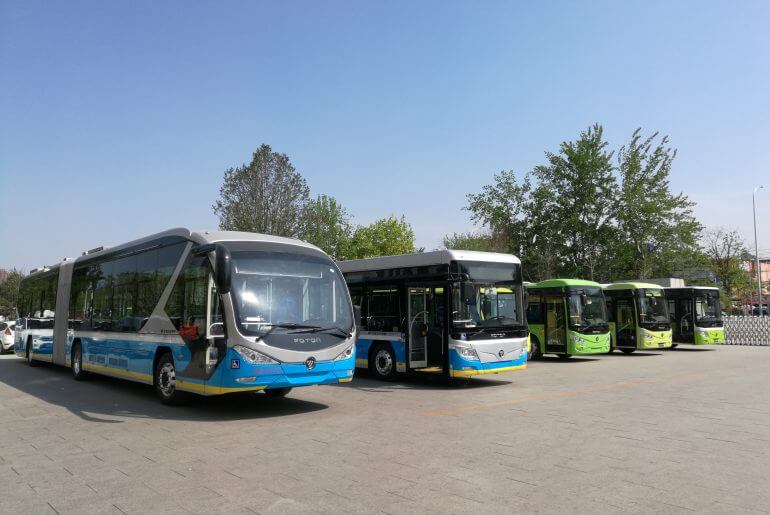 Trends and challenges in electric-bus development in China

Development of Electro Mobility in China

The development and use of electric buses in China has risen significantly over the past 5 to 10 years, driven by national energy policies to diversify source of energies and to improve urban air quality. As an additional benefit, decision makers also see the opportunity to promote the domestic automotive industry.

In the overall electro mobility development, China has become a global forerunner: it is home to the biggest number of pure electric, hybrid, and hydrogen fuel cells new energy vehicles (NEVs) in the world. The annual sales of NEVs has increased by an average of 86.5% from 2009 to 2017. In 2017 alone, 777,000 electric and plug-in hybrid vehicles were sold, topping the world for three consecutive years according to China Association of Automobile Manufacturers (CAAM). The number of recorded new energy vehicles in China is 1.8 million, accounting for over half of that in global market. Battery electric light duty passenger vehicle accounted for 60% and battery electric bus/coach accounts for 11.5% of the new energy vehicle stock. Figure 1 illustrated the number of new energy vehicles in China by technology type.

The rapid electrification of Urban Bus Networks in China

Similar to the spread of NEVs, also the demand for electric buses in China has increased significantly. Figure 2 shows sales of new energy busses and coaches in China (based on data released by CAAM). Particularly in 2015, due to the Chinese central government`s tax exemptions and discounts for e-bus purchases, e-bus sales have seen a 5-fold increase from the previous year. Most buses were sold by the Chinese companies BYD and Yutong. According to a report by China Academy of Transport Science, the success of busses from these companies is due to longer battery life, driving distance, and efficiency of its buses.

In 2016, nearly 70 percent of newly purchased busses in China were pure electric busses while the share is only 43% in 2015. The primary reason of significant increase of pure electric busses is due to that bus operators received twice the amount of subsidies compared to plug-in hybrid busses according to the newly released third phase of subsidy policies(2006-2020). Accordingly, sales of diesel and CNG busses decreased, as can be seen in Figure 4.

In 2017, sales of battery electric busses dropped by 20% due to national and local governments slashed subsidies for new energy bus and tighten regulations over subsidies. This is an indicator of the effectiveness of subsidies and tax policies in supporting the spread of e-busses. At the end of 2017, more than 250,000 new energy buses were cruising on Chinese roads.

Types of e-busses in China

In China, the share of the different NEV bus types in stock at the end of 2017 are:

The Chinese incentive program “Ten Cities, Thousands of Vehicles” to promote the diffusion of new energy vehicles in public service and urban bus fleets contributed to the spread of e-busses in China. Also local government initiatives toward clear air accelerated the adoption of e-bus in China.

Since the introduction of the demonstration program “Ten Cities, Thousands of Vehicles” by the central government in 2009, China has initialized a number of fiscal and tax policies to promote the adoption of new energy urban busses. These incentives target three main levels, as can be seen in Figure 5:

The main government initiatives to support the sales of e-busses in China were:

Compared to diesel (and hydrogen) buses, one shortcoming of electric busses remains the low energy density (that means that the same weight of diesel fuel will have more energy than the same weight of an e-bus battery). Therefore, the driving range of battery buses is shorter compared to conventional busses and that the charging of the e-bus battery takes more time. The obvious attenuation of battery capacity after 3-5 years is bothering the operation of e-bus. Another challenge is that the land consumption for electric bus depot is significantly higher comparing to diesel bus due to the development of charging infrastructure.

But over the past few years, Chinese operators accumulated experiences to operate electric bus economically. By the end of 2017, city of Shenzhen has completely transformed its urban bus fleet of 16,359 buses to all-electric models as fleet operators see the economics become more attractive the bigger the fleet. This bus transition has been years in the making since 2009 Shenzhen was chosen to be one of thirteen cities in a pilot program of new energy vehicles.