Workshop on Sustainable Financing for Urban Public Transport in China

It is not new that China currently is undergoing rapid urbanisation processes. Hence, it is essential for the populous Chinese cities to develop comprehensive and integrated public transport networks in order to cope with the continuously increasing mobility demand. However, this results in additional financial burdens, which in many cases are challenging to overcome. It is even more difficult when such additional expenditures have to be undertaken by local authorities, which in most of the cases depend on the national budget.

The question of how to finance urban public transport is critical in the Chinese context, as the national budget law, the major financing mechanism for public transport in China, cannot meet the cities’ demand for sustainable funding anymore. In order to take a step forward towards changing the way the public transport sector requests and receives funds, China Urban Sustainable Transport Research Centre (CUSTReC) organised a workshop on “Sustainable Financing for Urban Public Transport in China”. The workshop, held on 29 October 2015 in Beijing, included international and local experts, who shared their experiences and jointly considered new options for adequate public transport funding in China. This way, the local Chinese experts could get a glimpse on how their colleagues from abroad are addressing the issue of financing public transport. GIZ was represented at this workshop by Alexander Jung, with a presentation on how Germany succeeded in financing its comprehensive urban transport systems.

It is commonly agreed that public transport has to be subsidised. This comes in the context when it is proven by experience that the farebox revenues hardly cover the costs of the service. Rare are examples when the farebox revenue covers up to 70% of the actual infrastructure and operation costs, as reported by David King from Columbia University. That being the main reason why the urban public transport providers are seeking for additional funds to cover their expenses. The question is, however, how exactly can reliable financing streams be provided? It is a question which is largely debated today in the Chinese public transport environment.

So far, the major funding sources for public transit, for the Chinese cities, are the revenues from land sales for private development rights of the rural agricultural land together with the rights for private development around the transit nodes. The revenues are, mostly, oriented towards infrastructure projects. Besides these, other common ways to financially support public transport are from car and fuel taxes, as it was mentioned by Licheng Zhang, senior researcher at the Research Institute for Fiscal Science, Ministry of Finance. At the same time, in cities like Shanghai and Guangzhou, the local government allocates additional subsidies to public transport based on the revenue of license plate auctions. In many cases, however, these funds are not enough to entirely support the development or, even, maintain the public transport network.

The good news is that there are already various Chinese initiatives dealing with urban public transport funding. CUSTReC, for instance, is undergoing a research project in eight Chinese cities. The aim of the project is to study and understand, through various research methods (workshops with local authorities, interviews and questionnaires), the roots of the problem and to come up with an exhaustive analysis and recommendations on how China can improve its public transport financing system. While the final results are expected to be published at the beginning of 2016, this workshop on sustainable financing of urban public transport comes as a contribution to the overall project.

Further, the central government issued a new Budget Law, which changed the previous regulations from 1994. The new Law comes with improvements by changing the way local governments can access public funds for urban public transport. While previously, local governments had to be innovative in finding ways to borrow money from the central government – for instance by using third party structures as Urban Development Investment Companies (UDIC) – the new Budget Law facilitates direct funding access for municipalities based on their own creditworthiness, as stated by Binyam Reja, Lead Transport Specialist, The World Bank Beijing office.

Nevertheless, China still has a long way ahead to improve its urban public transport system, from planning and financing to maintaining and innovating. The good news is, however, that it is already on the right path. One fundamental prerequisite is crucial, though, as mentioned by Binyam Reja: there is a need to rethink the way public transport can be financed in a reliable and sustainable way. Former regulations are outdated and cannot keep up anymore with the rapid pace of the public transport development. 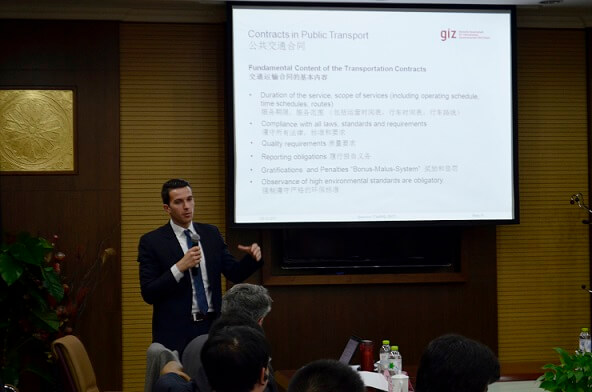