The transport sector in China needs to start outlining intermediate efforts to play its role in reaching the recently set long-term target: carbon neutrality by 2060 as announced by China’s President Xi Jinping on Tuesday, September 22, 2020 during his speech at the General Debate of the 75th session of the UN General Assembly.

In particular, the transport sector plays a key role in achieving the ambitious target of decarbonization. The transport-related carbon emissions in China increased from 397 million tons in 2005 to 1.04 billion tons in 2018[1], accounting for about 10 percent of the country’s total emissions. Emission reduction, ambitious roadmaps and measures in transport are crucial to realizing the target of carbon neutrality, since transport is the only sector where carbon emissions will be most unlikely to peak around 2030. However, China in its Nationally Determined Contributions to the Paris Agreement pledged to have carbon emissions peak around 2030 and make every effort to peak earlier. Therefore, the promotion and electrification of public transport plays a key role in the roadmap to build a green and low carbon transport system in China. With the vigorous development and technological advancement in vehicle, battery and charging technology, and with smart and intelligent traffic management system adoption, electric buses have become important means for achieving the climate target in the transport sector.

In recent years, China’s central government and local authorities have launched various supportive policies to push market development, foster advanced industry chains, create a skilled labor force and to achieve technological breakthroughs and efficiency gains in the field of New Energy Bus technology. These policies include subsidies for purchasing and operating New Energy Buses, tax reductions and other incentives for phasing out and decommissioning buses powered by conventional combustion engines. By the end of 2019, 400,000 New Energy Buses were in operation in China. The share of New Energy Buses in the overall bus market increased from about 1% in 2013 to 55% in 2019.

To further promote the sustainable adoption of New Energy Buses, battery-electric buses in particular, to increase operational and bus system efficiency and further bring down costs, it is crucial to better align demands and requirements of bus operators with the technical development and real-world vehicle performance. To meet these goals, under the guidance of the Chinese Ministry of Transport (MoT), the China Academy of Transportation Sciences (CATS) of MoT organized the 2020 EB-PAC National New Energy Bus Performance Evaluation Competition and 2020 CAB-C China Autonomous Bus Challenge.

The 4 days-long 2020 EB-PAC, which took place from 15 to 18 September in the city of Chongqing, was held under the theme “Green Mobility, Healthy Life”. The event was organized for the third time after being successfully held in 2018 and 2019. The 2020 EB-PAC aimed to comprehensively examine the real-world performance of electric buses and build a platform for technical exchange between bus manufacturers, bus operators, cities and policymakers and various experts in the field of urban bus electrification and adoption.

Along with the 2020 EB-PAC, the 1st China Autonomous Bus Challenge (CAB-C) took place, where 7 Level-4 automated buses and pods competed with each other.

During the 2020 EB-PAC, battery electric buses were comprehensively evaluated by the following technical parameters:

A total of 24 New Energy Buses models from 14 bus manufacturers and 7 self-driving buses from 7 manufacturing companies have competed fiercely at the Chongqing Motor Vehicle Inspection Testing Field where the event took place.

On 18 September, the National New Energy and Intelligent Networked Bus Technology Seminar and Competition Results Conference was held as closing event to the EB-PAC and CAB-C. With a focus on the latest development trends in the field of electric and intelligent and connected buses, more than 100 Chinese experts, scholars, representatives from bus enterprises and operators engaged in discussions on the event results before announcing the winners. 10 models from 7 companies won awards in the 3 categories “Energy Saving Superior”, “Endurance Superior” and the “All-round prize”, and 7 models from 7 companies were entitled as the “Challenge Superior”. A detailed list of the winners can be found below.

During the conference, Mr. Markus Delfs, Head of Cluster Sustainable Transition of GIZ China delivered a keynote speech, shared his insights on the trends of bus electrification in Europe and Germany, and the role of electric buses in the overall climate mitigation roadmap towards making Europe carbon neutral by 2050, as part of the European Green Deal. Mr. Delfs highlighted the importance of cooperation between Chinese, German and other international stakeholders for the sustainable and climate-friendly development of the transport sector, and public transport in particular. He further emphasized the role of the Sino-German Cooperation on Low Carbon Transport project of GIZ as a platform for facilitating dialogues and technical exchanges on the topic.

When commenting on the evaluation results, the experts pointed out that this year’s participants showed better energy saving abilities, especially those in the 8-meter bus group.  They also mentioned that the total power storage capacity of each group of buses strengthened, compared to the case in the last two competitions in 2018 and 2019. Mr. SUN Xiaonian of CATS said, “vigorously promoting the application of new energy vehicles in the transportation industry is a concrete step to implement the development concept of lucid waters and lush mountains are invaluable assets (which describes that resource conservation and environment protection will bring huge economic benefits), promote ecological and climate-friendly development, build an efficient green travel service system and enable the construction of a “Beautiful China”[2]. According to Mr. Sun, the buses competing in the EB-PAC represent the most advanced technical development of New Energy Buses in China.

In recent years, autonomous and connected vehicles have become a key element in the development roadmap of China’s automotive industry. The vehicles participating in the CAB-C China Autonomous Bus Challenge represent the highest technology level of China’s autonomous bus industry. Xiamen Golden Dragon Bus Co. Ltd and six other manufacturers won this year’s CAB-C where sensor performance, driving behavior and road safety among others were tested.

During the EB-PAC, the Sino-German Cooperation on Low Carbon Transport (CLCT) project hosted an interim review workshop for the ongoing study on climate-friendly e-bus system development, which is commissioned by the CLCT project to CATS and is implemented from 2020 to 2021. The study aims to summarize the key technologies and application experiences of electric bus adoption in selected front-runner cities in China, provide lessons learned and references to other cities and encapsulate the results into concrete recommendations to bus operators and policy-makers, so as to promote more efficient and sustainable electric bus development in China from vehicle procurement, operation, maintenance, decommissioning and recycling and overall system planning.

The workshop provided a platform to share the interim outputs of the study with international and Chinese experts, collect feedback, and exchange different approaches of bus electrification in Germany and China.

If you are interested in knowing more about the progress of the research, please feel free to contact Ms. YIYANG Chenzi (chenzi.yiyang@giz.de) and Ms. XIA Yun (xia.yun@giz.de),  technical advisors specializing in electro-mobility and new mobility services at GIZ China.

[2] “Beautiful China” is a concept put forward during the 18th National Congress of the Communist Party of China (CPC), emphasizing the significance of building ecological civilization and its incorporation into the country’s overall development plan together with economic, political, cultural and social progress. 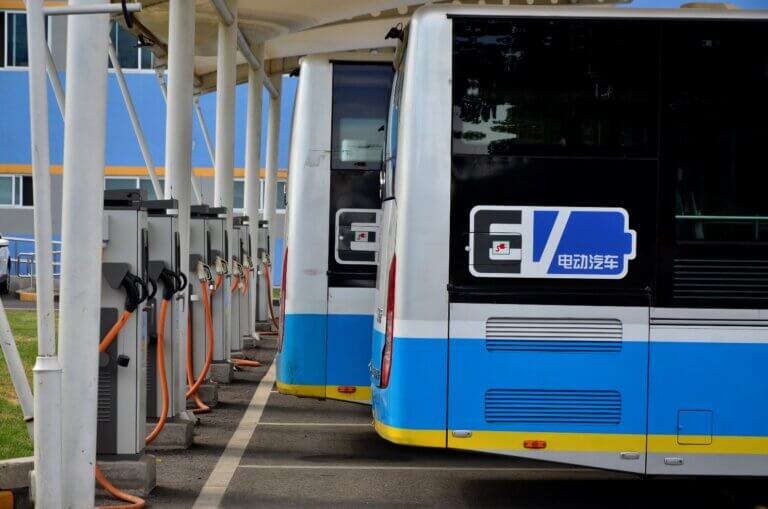