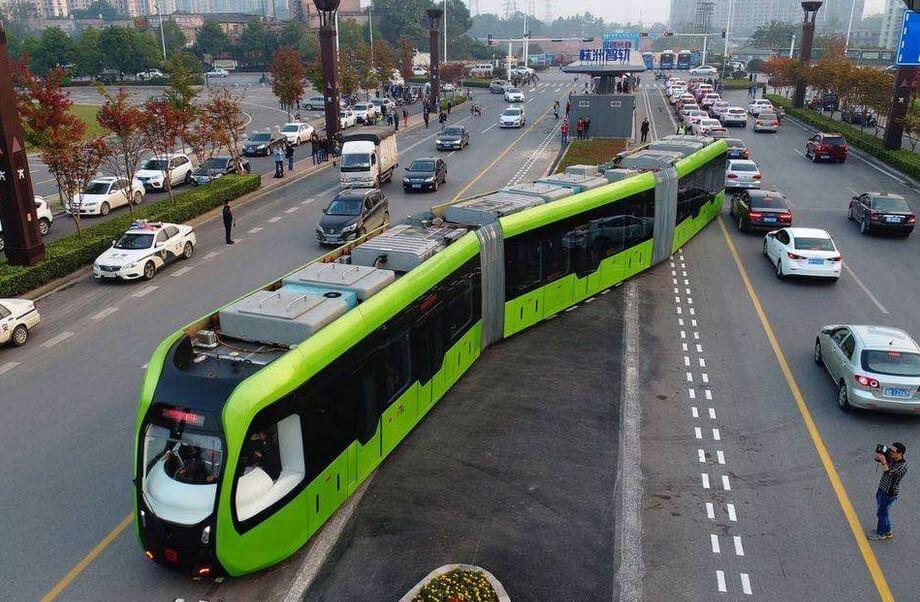 Are Chinese trackless trams the best new thing to hit the road in your city?

The way urban transport and the mobility industry have changed in the last years has no similar precedence. Traditionally, private cars and public transport have been the common choice for urban mobility, now enlarged by a plethora of new app-based mobility services such as ride-hailing or scooter-sharing which have permeated our cities. More recently, the focus is moving towards promoting innovations in public transport against car-based solutions in urban environments, also in China.

For decades, China has invested in the development and expansion of its public transport infrastructure including High-Speed Railway (HSR), subway and Bus Rapid Transit (BRT) systems. But China also has promoted public transport innovation, in particular in the field of vehicle automation. A new approach to urban transport is the trackless tram, also known as Autonomous Rail Transit (ART), which caught the attention of the international transport community when it was unveiled by China Railway Rolling Stock Corporation (CRRC) in 2017.

What are trackless trams?

The trackless trams were first tested in 2017, starting commercial operation in 2019, in the South Chinese cities of Zhuzhou and Yibin. The articulated vehicle is bi-directional (it has a driver cabin at each end) and comprises three sections, each of them with capacity for 100 passengers. With three-carriages, the train is 31.7 metres long, 3.4 metres high and 2.65 metres wide and has a total weight of 48 tons. It has a maximum speed of 70 km/h and uses a low-floor layout to facilitate accessibility.

The trackless tram system is designed for corridors of 8 to 20 km length that serve the inner areas of large cities with stations spaced between 600 and 1,200 meters apart, serving 1.5 km around each station.  Being a long vehicle, big clearance is necessary at every passing intersection to ensure a good turning radius (about 15 metres) and spontaneous maneuvering (for example rerouting due to traffic jams) is limited. However, the trackless tram has a certain level of route flexibility and since the system uses rubber tires, can deal with higher gradients when compared with traditional trams.

Partially autonomous, trackless trams make use of a sensor-based assisted driving system which consists of satellite navigation and several optical and radar sensors along the main body of the vehicle. At the front of the cabin, an optical sensor follows marks printed on the ground (virtual track) “guiding” the trackless tram. Even though the system is called Autonomous Rail Transit, this mostly refers to its capability to ride automated on a track and assisting the driver in maneuvering (e. g. lane departure warning, collision warning, potential route change authorization to enable the vehicle to be diverted around blockages, unlike a tram). The driver is still needed to control the vehicle maneuvers and to evade obstacles.

The trackless tram does not rely on catenaries for power transmission. Instead it uses fast-charge on-board 600 kWh lithium ion phosphate batteries that can charge at 10kV by connecting to overhead pantographs at the stations. Charging at every station for about 30 seconds provides enough electricity for a range of 3 to 5km to supply the line operation. Fully charged via deep overnight recharge in the depot, the vehicle has a maximum range of 40km.

According to CRRC, the deployment cost of the technology is about EUR 6-14 million per km, lower than traditional trams and heavy rail mainly due to savings in infrastructure investment.

Once installed, traditional trams are low energy mass transit systems which are sustainable and very cost effective. Trams – steel on steel – only have a fraction of rolling resistance of soft rubber tires and are therefore very energy efficient. In addition, traditional trams do not rely on resource intensive and weight-adding batteries and do not need separate charging infrastructure. However, costs and impact associated with upfront construction are significant hurdles for their introduction. It usually requires the complete redesign of whole streets, the moving of existing underground services and the consequent utility restoration in order to lay the rails, platforms and dedicated electric infrastructure. This together with the high investment costs and the often years-long related disruption of street and commercial activities is a common argument used against light rail developments.

The trackless tram is capable to run on normal asphalt streets. Nevertheless, a high-quality asphalt is necessary to ensure smooth rides as trackless trams have low floor designs and therefor potholes and deformities are not tolerable. As for road infrastructure, trackless trams, similarly to BRT, require full right of way to keep their commercial speed and optimum operation, which makes dedicated specific lanes and platforms necessary. Consequently, specific station-like stops have to be constructed. Furthermore, any necessary road construction will most likely lead to issues also faced by light rail – e. g. infrastructure investments for communication signal equipment, control centers, intersection signal priority systems, road safety facilities, replacement of utilities – albeit without the investment and maintenance of the rail and catenary infrastructure themselves.

While not being a disruptive transport innovation, trackless trams with limited investment needs and construction impact can be an innovative and viable alternative for cities which are looking for the capacity of a tram system but are not able to mobilize sufficient resources and public support. Trackless trams, as complement to trams or BRT systems, could potentially be applied to serve low density urban areas, to connect urban and sub-urban areas or to areas where rail construction is not possible.

Each city should evaluate carefully how trackless trams may fit into their current or future public transport network, considering what is the most suitable and cost-efficient option available for their specific needs. Trackless trams are still in their infancy at the operational level and more data may be required to further assess their real-world performance.

The target of applying new technology and implementing new public transport solutions should always be to make transport more climate-friendly and to ensure reliable, affordable and inclusive mobility. Without comprehensive Sustainable Urban Mobility Planning and human-centred urban infrastructure development, technological innovation alone may not be enough to solve the urban transport issues in our cities.

If you would like to know more about what GIZ is doing to make transport and mobility more effective, seamless, accessible and low-carbon, get in touch with us.