The newest issue of our China Transport Sector Policy Briefing is here! The Sustainable Mobility Team at GIZ in China provides you with regular summaries of new important policies in China’s transport sector.

In the beginning of 2019, the Chinese government is planning to strengthen China’s automotive industry, with a focus on ICV and NEV industries, while curbing pollution caused by diesel trucks.

Based on the “Implementation Plan on Improving and Promoting the Consumption System (2018-2020)”, NDRC on 29 January 2019 released an “Implementation Scheme on Supply-Side Measures for Further Promoting Steady Growth of Consumption and Forming a Robust Domestic Market (2019)”. The scheme sets forth a series of measures to stimulate consumption and to upgrade the industry structure in China.

In the automotive area, local governments should implement measures according to their local conditions, such as promoting the upgrading of vehicles through subsidies for the purchase of new cars in exchange for the scrapping of old vehicles (those falling under CHINA III emission standards) or subsidies to rural residents for scrapping three-wheelers and purchasing light duty and passenger vehicles (trucks under 3.5 tons or passenger vehicles with up to 1.6 liter engines). The central government will financially support local governments in their implementation of effective pollution control measures, such as promoting the use of NEVs and phasing out heavy-duty trucks, and will continue working on improving NEV subsidies.

Two provinces and one major city are on the way of implementing concrete measures:

Zhejiang Province (home to the Geely Holding Group Co., Ltd) is one of the richest and most developed provinces in China. They issued a plan which targets the building of a world-class automotive industry cluster by 2022. By then, the province’s auto production should reach over 3.5 million units, of which more than 800,000 units should be NEVs. Moreover, the province will build various national innovation and technology centers focusing on manufacturing, technology and testing in the automotive industry.

Liaoning Province (home to BMW and the Brilliance Automotive Group) wishes to improve the international competitiveness of its advanced equipment industry. Therefore, Liaoning Province released the “Implementation Scheme for the Construction of an Advanced Equipment Manufacturing Base”, which includes a sub-project related to NEVs.

The plan stipulates that Liaoning Province will focus on the development of energy-saving vehicles, ICVs and core components. In the field of special vehicles, the province will focus on the development of pure electric and hybrid vehicles for airport shuttle services, snow removal, police and sanitation services and other fields of application. A project management office for coordinating and managing the manufacturing projects, specifically for those projects on energy-saving vehicles and NEVs, will be set up and located on the premises of the Brilliance Automotive Group.

Shenzhen (home to BYD) announced a first round of support plans in order to accelerate the development of the green and low-carbon industries of the city. One focal point lies on supporting the NEV industry. This includes the development of key components, materials, manufacturing and equipment for batteries, electronic controls, motors, charging equipment and DC converters.  Research and development and commercialization of hydrogen production, storage, and filling technologies are another focus area.

The war on pollution continues

On 4 January 2019, eleven departments including the Ministry for Ecology and Environment (MEE), the National Development and Reform Commission (NDRC), the Ministry for Industry and Information Technology (MIIT) and the Ministry of Transport (MOT) jointly issued the “Action Plan for the Pollution Control of Diesel Trucks”, based on the targets stipulated in the “Three-Year Action Plan for Defending the Blue Sky 2018-2020”. It calls for strengthening the supervision of environmental protection standards for newly produced vehicles. It furthermore restates that key areas (Jing-Jin-Ji region, the Yangtze River Delta, the Pearl River Delta) and the Chengdu-Chongqing region will implement CHINA VI emission standards for motor vehicles ahead of the original schedule. Instead of following the deadlines put forward on a national level (July 2020 and 2023), it reconfirms these regions will start implementing CHINA VI starting from 1 July 2019, as announced in the Three-Year Action Plan, which seems to be a realistic goal. Whereas the 2023 goals pose a major challenge to the local industry as this standard is even stricter than the Euro 6 standard.

Just last week, MEE again encouraged cleaner fuels and announced to crack down harder on substandard diesel vehicles in its war on smog. Furthermore, they encouraged a stronger shift from road to rail. We have seen in the past month that intermodal transport is taking up. Fujian province, one of the centers of e-commerce in China, promotes a shift from road to rail and ship. The same accounts for Tianjin: A new set-up for bulk cargo transportation is scheduled to take basic shape by 2020, with a focus on enhanced efficiency, last-mile solutions, railway hubs, as well as collection and distribution channels within ports. Tianjin will also set up a demonstration project on combined container transport via waterway and rail and will promote the interactive sharing of information on multimodal transport. 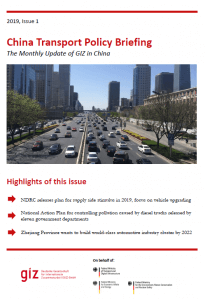