The July edition of our China Transport Sector Policy Briefing is here! The Sustainable Transport Team at GIZ in China provides you with a monthly summary of new important policies in China’s transport sector.

This month, the government further stressed the promotion of new energy vehicles (NEVs) and the production and recycling of batteries, next to new regulations on emission reduction, adjustments of transportation structure and increased energy efficiency in the transportation industry.

In July 2018, Chinese Premier Li Keqiang presented the “Three-Year Action Plan on Defending the Blue Sky”. It aims at a reduction of emissions and an improvement of air quality, especially in the Beijing-Tianjin-Hebei (Jing-Jin-Ji) region, the Yangtze River Delta, and the Yan-Ping Plain (Shaanxi and Shanxi Province). The plan stipulates a 15% reduction of sulfur dioxide and nitrogen emissions by 2020 compared to 2015 and tighter restrictions on PM2.5 emissions.

For the transport sector, new energy vehicles (NEVs) will play an important role. The action plan set the goal to produce 2 million NEVs by 2020, with a focus on the logistics sector. The existing logistics fleet shall be partially replaced by NEVs, while the remaining conventional logistics vehicles will be subjected to harsher restrictions. Furthermore, rail freight transport volume shall increase by 30% compared to 2017, and even by 40% in the Jing-Jin-Ji region. The Jing-Jin-Ji area was also targeted by MoT Vice Minister Liu at a State Council Policy Briefing. The region urgently needs a shift from road to rail and from road to waterways. In the coming three years, the volume of railway and waterway freight is set to increase by 1.1 billion tons and 0.5 billion tons respectively. To put this into perspective, this increase in railway freight transport equals adding the size of Germany’s total railway freight of 2016 – that is 349 million tons – each year- just in the Jing-Jin-Ji area!

Furthermore, an amazing number of more than 1 million heavy-duty diesel trucks which are of or below the National III Standard will be decommissioned.

Compared to China V, China VI lowers the limit for emitted NOx by more than 77% and for emitted particle matter (PM) by more than 67%. The second phase of the new standard also puts the first limit on emitted PM and for the first time requires a portable emission measurement system (PEMS) test on real road conditions. It also introduces standards on the warranty of emission controlling equipment and some auto parts.

Vice Minister Liu also announced pilot zones in the Jing-Jin-Ji region and the surrounding area with a focus on further structural changes. One such change will be the prioritization of support for railways not operated by the government. This is in line with China’s SOE (state owned enterprises) reform that requires  to open certain sectors for private businesses.

Also for Liu the usage of new energy vehicles (NEV) in urban distribution is of priority, with the proportion of NEVs amongst updated distribution vehicles set to reach 80%.

The push for NEVs goes on! With immediate effect, on 27 July 2018, MIIT, MoT and others jointly announced that NEVs and new energy vessels will be fully exempt from vehicle and vessel tax. Of course there is some preconditions to that:

With ambitious goals for NEVs and an astonishing number of EVs already in use, the topic of battery recycling and reuse of batteries is gaining momentum in China. For transparency and traceability reasons, as of August 1st 2018, MIIT established an administrative platform (http://www.evmam-tbrat.com/) where information concerning traction batteries will be collected. Battery producers, automakers, vehicle recycling and scrapping enterprises, enterprises in the business of battery cascade utilization as well as battery recycling enterprises are responsible for uploading information on the batteries. At the same time, MIIT, MOT, MOST and other ministries announced 17 pilot areas (including the Jing-Jin-Ji region) for the implementation of a traction battery recycling system. China Tower Co., Ltd. will be in the lead to integrate the pilot projects, to report on them, to develop a battery cascade utilization demonstration project, and to establish an industry association. You might have read about China Tower Companies’ IPO beginning of August. The company once was created by China’s three state-run telecoms, and the funds raised through the IPO will be invested in such areas as 5G wireless technology, which Beijing plans to deploy on a large commercial scale by 2020 as part of its national policy.

In comparison to other countries, battery recycling is already an urgent topic for the Chinese government. End of July, MIIT announced the first White List of five NEV battery recycling enterprises. According to MIIT, these five Chinese champions meet the “Standard Requirements for the Comprehensive Utilization of Decommissioned NEV Power Batteries”. One might not be familiar with Huayou Cobalt, Ganzhou Highpower Technology and JHD, but the list also includes GEM and Brunp, which have very close ties to BYD and CATL, China’s largest traction battery manufacturers. The selection criteria were

Looking into the future: On 4 July 2018, eight key projects were approved as part of the Medium and Long-Term Development Plan of the Automobile Industry and we clearly see where the journey goes as the topics are ICV promotion, building high quality brands, overseas development, further R&D and promotion of NEVs and other buzzwords that sound so familiar to those of us familiar with China’s strategy “Made in China 2025”. 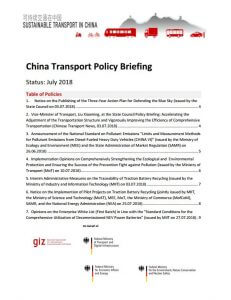