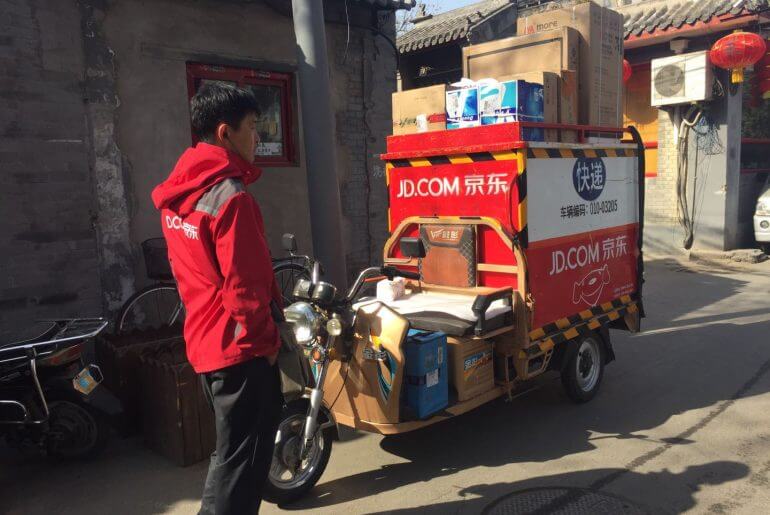 Electric 3-wheelers in urban delivery in China and Germany – a bumpy road ahead?

Without a doubt, online-shopping for all kinds of goods and food has been increasing in most countries and with it the demand in Courier, Express and Parcel (CEP) deliveries, causing major environmental problems and big challenges for the last-mile delivery.

Logistics providers are continuously experimenting with different solutions to solve this problem. One very widely adopted workhorse for last mile delivery in China has been the electric 3-wheeler. Being also used for other purposes than CEP delivery, such as for example waste and disposal management, the electric 3-wheelers flood the streets of Chinese cities in unthinkable shapes and applications, playing an indispensable role in the functioning of urban agglomerations. They are appreciated by logistics operators for their ability to circumnavigate most traffic jams and to deliver small goods to the crowded and sometimes very narrow streets of Chinese cities. However, with the growth of deliveries, the electric 3-wheelers are not always welcomed: Chinese cities increasingly view it as a nuisance and indeed ban it from the cities´ streets.

In this article, we want to have a quick look at the possibilities and trends in the use of electric 3-wheelers for urban delivery in China and Germany.

Electric 3-wheelers are omnipresent on the streets of Chines cities. Coming in different configurations and technical characteristics – closed and open cabin, heavy and light cargo vans with closed boxes or stacking surface – 3-wheelers became the solution of choice in goods and service delivery in Chinese cities over the past decade. Today, electric tricycles account for about 90% of all last-mile shipments with each driver delivering an average of 300-360 kg of goods every day. The reasons for the success of electric 3-wheelers are obvious:

A Bumpy Road ahead – Chinese cities` drive to ban 3-wheelers

Despite the advantages of 3-wheelers for urban delivery, Chinese city governments are increasingly worried about the risks of 3-wheelers. They have banned 3-wheelers from designated areas (such as university campuses) or even entire cities. In March 2016, for example, the Southern Chinese city of Shenzhen removed 18,000 electric bicycles (including two- and 3-wheelers), while penalties or even detentions were imposed for driving without driver license or  a missing number plate.

Two particular problems stand out that caused Chinese cities to react in this manner:

While the first problem seems solvable by better enforcement of traffic laws, the second problem of standardization and regulation runs deeper.

Regulation of electric 3-wheelers in China

Regulation of electric 3-wheelers in China is locked in a kind of administrative quandary.

Trying to find a solution for this dilemma, the State Post Bureau (SPB), which is responsible for regulating delivery, released the industry standard YZ/T0136-2014 “Electric-Tricycle Technical Requirements for Express Special” in June 2014. The standard outlined the outside dimensions, weight, speed, battery, braking performance etc. of 3-wheelers. However, as the standard was not mandatory, companies did not follow it. In October 2015, a State Council decree urged the issue of a national standard governing the production, usage and management of electric 3-wheelers for express delivery and in April 2016, the SPB submitted a draft standard for comment, which was based on the industry standard of 2014, to the Standardization Administration (SAC).

In this standard draft, the SPB tends to treat electric 3-wheelers as non-motor vehicles and with that sets the maximum speed to 15 km/h. If implemented, it would give electric 3-wheelers the right of way on bicycle lanes and would not require a license plate for the vehicle nor a driver`s license for the courier. The standard further stipulates a switch from lead-acid batteries to lithium batteries, which costs about 2,000 RMB (about EUR 250).

However, express delivery companies raised major concerns about the speed limit, which would decrease operational efficiency, and the costs associated with retrofitting the batteries. So far, there has been no time line set to release the mandatory standard.

Consequences of a 3-wheelers driving ban

The ban of electric 3-wheelers has not only hit the express delivery industry. Courier drivers had to find another job, which in China is often difficult due to the Chinese Hukou system (which is similar to a residence permit for particular cities). Also customers were concerned, as they were afraid that their deliveries would not arrive in time or at the customary low cost.

The way ahead for electric 3-wheelers in China

The Chinese express industry raised its concerns against the policies of the cities and called for the “right of way” for electric 3-wheelers. During the National People’s Congress and Chinese People’s Political Consultative Conference (NCP & CPPCC) in 2017 in Beijing, the State Post Bureau (SPB) Minister Ma Junsheng pointed out that electric 3-wheelers are a key element for the development of the express delivery industry and urged to accelerate the formulating of a national standard. He also encouraged local administrations to develop regulations, which set clear rules for electric 3-wheelers, but provide them the “right of way”.

The German use of electric 3-wheelers for urban delivery

Just when China wants to get rid of their omnipresent mini logistic all-rounders, European cities are discovering the cargo bike as the new hype in urban delivery.

Compared to Chinese households, European customers still get most of their parcels with a classic delivery truck. However, the landscape is changing: the two most important players in the delivery market DHL and UPS as well as startups, like Velogista or VeloCARRIER are setting foot in the cargo bike delivery business with electric 3-wheelers. In order to make the most of the potentials of 3-wheelers, the delivery sector in Germany is also experimenting with new business models and logistic concepts: Prominent examples are UPS’s Rolling Laboratory initiative, or the City-Hub and the Cubicycle pilot introduced by DHL. Both companies have installed so-called micro-depots that store the packages within the distribution area of the bike. From June 1st, Berlin will deliver many of its packages for about 800,000 of its inhabitants per electric bike from micro-depots (which in the future might even be supplied with trams rather than trucks).

A UPS demonstration trail of electric 3-wheelers for delivery from a micro-depot in Frankfurt showed that the use of cargo bikes could replace three conventional delivery lorries per day. Substituting three such diesel-powered lorries by electric cargo bikes would reduce fuel consumption by approximately 32 liters per day, not only allowing for savings in operational costs, but also providing a green alternative that could save up to 25.5 tons of CO2 emissions  per year.

Regulation of electric 3-wheelers in Germany.

Similar to China, regulation of electric 3-wheleers depends on the classification of the vehicles. In Germany, the distinction lies between pedelecs s-pedelecs and e-bikes: if the 3-wheeler is a pedelec, i.e. the rider is pedaling himself and the bike supports the acceleration up to 25 km/h, the rider does not to have a license and can use bike lanes, while the bike itself does not need to have a license plate. If the bike is classified as an s-pedelec or an e-bike, i.e. it can ride with as well as without human pedaling, the rider needs a scooter license and the vehicle must have a license plate and must not ride on bike lanes.

The road ahead for electric 3-wheelers in Germany and China

While the potential of cargo bikes in last mile delivery is probably still underestimated by some companies as well as policy makers, electric 3-wheelers could provide urban logistics in an environmentally friendly and cost-efficient way. Particularly when looking at a more holistic urban delivery planning including new technologies like big data and internet based communication technologies, electric cargo bikes could be another puzzle to the integrative approach. However, policy makers in cooperation with logistic companies need to elaborate a better regulatory framework for the application of the vehicles to ensure public safety, optimize public space use and care for the safety of the drivers.