Feasibility of Carsharing Concepts in China

From the emergence of Chinese carsharing services in 2009 until today, more than 330,000 people signed up for a carsharing membership in China – equivalent to almost one third of the total number of carsharing members in Germany, one of the world’s largest carsharing markets. Considering that carsharing in China is still at an embryonic stage, its dynamic development indicates potential for further growth. Nevertheless, public and political awareness of carsharing are still low, its legal conditions are unclear and uncertainties related to the feasibility of large-scale applications remain.

In this context the Research Institute of Highway (RIOH) with the support of GIZ carried out a study on the legal conditions for carsharing services in China. The results of the study were presented at the one day workshop “Feasibility of Carsharing Concepts in China: Analysis of the Political and Legal Framework” on 28 January 2016, organised in a round table discussion format with Chinese municipal authorities, experts, researchers, and carsharing operators. In addition to a presentation about the study’s results, representatives from local authorities and carsharing operators were invited to give presentations on the topic.

As noted by the first speaker of the day, Mr. Wang Hao (RIOH), China is currently facing severe legal constraints regarding the support and promotion of carsharing services. The main challenges to be addressed in order to facilitate further development can be grouped into four categories: awareness raising, parking management, liability of users, and licensing of operators. The concept of carsharing still has not been legally defined and is therefore commonly misunderstood. Thus, a great effort needs to be dedicated towards raising awareness among the responsible policy makers as well as the general public, specifying the benefits of carsharing and the difference between carsharing, carpooling, and carhailing. At the same time, the integration of carsharing with public transport systems must become a primordial task for the responsible policy makers.

A different aspect and a way to make urban transport more sustainable is the authorities’ endorsement of the integration of new energy vehicles (NEVs) in carsharing services (E-carsharing). Beijing’s perspective on E-carsharing development was presented by the representative of the Beijing Municipal Commission of Transport, Mr. Jiao Tongming. In Beijing, E-carsharing operation along with the problems described above is hampered by an insufficient charging infrastructure. The good news, however, is that as of the beginning of this year Beijing authorities repealed NEVs from licence plate limitations, which makes it easier for E-carsharing providers to expand their services. This way, although direct carsharing promotion is still non-existing in China, E-carsharing operators can benefit from existing NEV promotion policies.

A good way to learn and understand how to efficiently and successfully adapt the concept of carsharing is to look at international examples. Alexander Jung, on behalf of GIZ, presented Germany’s carsharing experiences. In Germany central and local authorities are actively involved in supporting and promoting carsharing through various means. For instance, some municipalities substitute their corporate fleets in favour of using carsharing services, or, like in Bremen and Munich, are supporting the operators with access to public parking at reasonable prices and most accessible locations for the users. Consecutively, as carsharing has seen a tremendous success for the last years, the German Ministry of Transport and Digital Infrastructure issued a first draft of the Federal Law on Carsharing. The draft law includes a legal definition of carsharing and offers a framework for local authorities to allocate public parking spaces to carsharing operators. The law is due to be adopted this year.

In the afternoon, the discussion on the feasibility of carsharing concepts in China continued with presentations from Chinese carsharing operators. Representatives from car2go, the German free-floating carsharing operator launching its service in March 2016 in Chongqing, and China Car Clubs, an E-carsharing provider based in Hangzhou, talked about their carsharing operation models, shared their successes stories, and described difficulties encountered. Major problems preventing further development of their services were matching the points stated above: parking, user liability, and the understanding as well as acceptance of carsharing services by the general public. Nonetheless, these operational examples are able to cope with the entangled Chinese legislative framework.

Ultimately, China’s strive to make its cities better places with less congestion and a reduction of carbon emissions and air pollution is an effort that needs to be further encouraged. As it is known to reduce the amount of VKT by up to 45% (one carsharing vehicle can substitute up to 11 private vehicles), carsharing can support existing transport demand management strategies and contribute to sustainable development of urban transport. Consequently, the responsible policy makers are initiating the first steps towards a legal environment for carsharing services. The Chinese Ministry of Transport will release a new national guideline on car rental in 2016, which includes a section on carsharing for the first time ever in a Chinese government document. 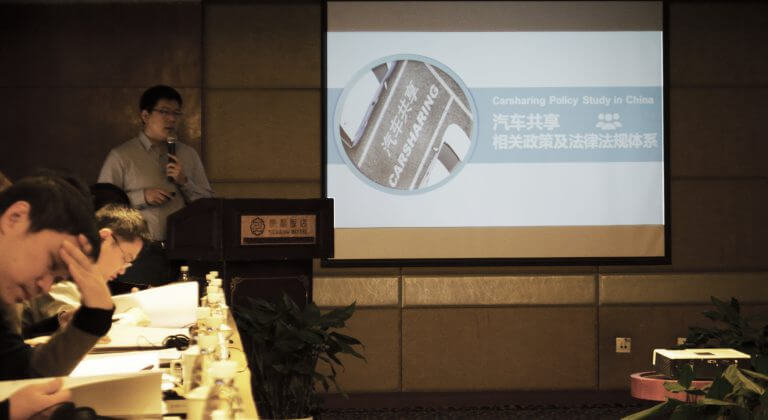