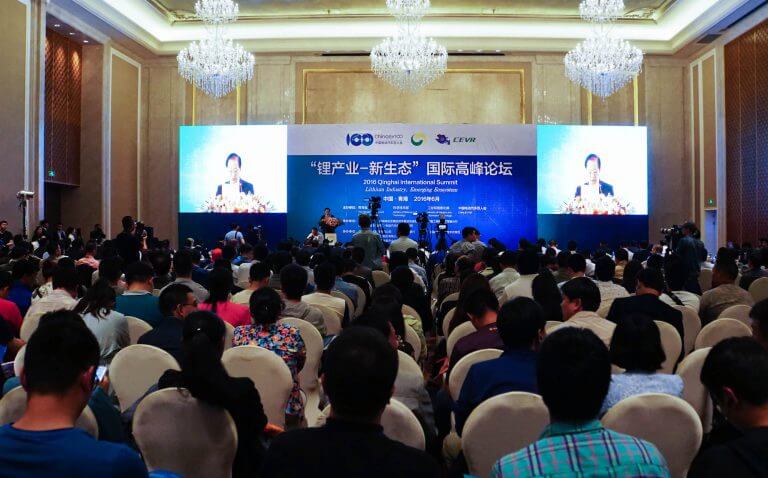 Jointly hosted by the provincial government of Qinghai, Ministry of Science and Technology, Ministry of Industry and Information Technology, and China EV100, the international summit “Lithium Industry, Emerging Ecosystems” was successfully held on 20th June 2016 in the city of Xining, Qinghai province. The province owns the richest lithium reserves in China (77.52% of total reserve countrywide) and its lithium industry development is getting more attention from all stakeholders in the electric vehicle industry. The summit focused on the topic of efficient resource utilisation and advanced battery technologies, and brought together more than 300 representatives from national and local government authorities, lithium manufacturers, battery manufacturers, electric vehicle companies and research institutions to exchange perspectives and share experiences. Mr. Hao Peng, governor of Qinghai and Mr. Chen Qingtai, Chairman of China EV100 addressed their opening remarks to the participants of the summit. Both pointed out that lithium resources as well as traction battery technologies are of strategic significance for the market uptake of electric vehicles. Furthermore, they are an important requirement for electrifying the transport sector.

It has been agreed that further efforts should be made to enhance the R&D capability of the Chinese traction battery manufacturers. Meanwhile, ecological protection must be taken into account in lithium industries. Senior industrial representatives from BYD, Samsung, LG, CATL and other battery manufacturers presented their corporate strategies and technological solutions regarding electric vehicle development, battery technology roadmaps, lithium utilisation as well as the potential role of batteries in future energy systems.

At the current phase, the mainstream traction battery technology still relies mainly on lithium as a resource. Increasing energy density remains to be one of the big challenges and an improved utilisation efficiency of traction batteries through effective recycling and cascade use will be necessary measures to achieve a sustainable development of the lithium battery industry.

As a member of the international advisory board of China EV100, GIZ was invited to deliver a keynote speech on the Sino-German cooperation in this field. Ms Sandra Retzer, Head of Transport of GIZ China, gave an overview of the latest development of related Sino-German cooperation projects on EVs and traction batteries, and shared experiences and findings from research projects in Germany with a special focus on traction battery recycling, efficient resource recovery technology as well as second-use concepts for traction batteries. The results of these projects showed that first of all, technological solutions for recycling of lithium materials with high efficiency from traction batteries are already feasible in Germany. Secondly, eco-design (meaning that the battery pack is designed for easy dismantling at the battery manufacturing stage) could help to improve the recycling efficiency.

Under the framework of the German Electric Vehicle Showcase Project, which launched in 2011, feasibility research on second-use of lithium batteries already showed possible application fields such as second-usage for primary frequency control or for household energy storage systems.
As for traction battery recycling, GIZ will further promote the political, academic and industry exchange in this field under the framework of the Sino-German Working Group of Traction Battery Recycling.

This continuous collaboration has been reaffirmed during the Sino-German government consultations that took place in Beijing last month and highlights the need for a strong bilateral cooperation in this area as well in the transport sector overall.