Measures by the Chinese Government to Promote Electro-Mobility

Developments in the field of New Energy Vehicles (NEVs) in China have exceeded all expectations. The Middle Kingdom is by far the largest market for NEVs, with 50 % of global passenger cars being sold here (International Energy Agency (IEA), 2018). The numbers for NEVs are ever increasing: in the first half of 2018, NEV sales already reached 412,000, up from 195,000 vehicles sold in the first half of the previous year (Center for Automotive Management (CAM), 2018). Overall, China has taken a pioneering role in the e-mobility sector, with numerous Chinese cities on their way to having a fully electrified bus fleet by 2020, if not sooner.

China’ s quick progress in the electro-mobility field is as much a result of industrial policy considerations as environmental concerns. A comprehensive electro-mobility ecosystem is a foundational aspect of what China regards as a strategic industry in the coming decades, supported by measures implemented at national, regional and local levels. The goal is for NEVs to make up 20 % of all vehicle sales by 2025 (State Council , 2015).

China’s transition to electro-mobility has led to a general reshuffling within the global automotive market, which of course has significant consequences for German car manufacturers. China is currently both the world’s largest automotive production site and its largest sales market, as well as an industry leader in terms of investment and development. Hence, the country has not yet realized its full potential in terms of NEV. In 2015, the density of passenger cars was a mere 121 vehicles per 1,000 people – a figure that is estimated to increase to 200 by 2021. This is still notably less than the passenger car density in Germany, which currently stands at 555 vehicles per 1,000 people (2016). However, the situation in first-tier coastal cities such as Beijing, Shanghai or Shenzhen is markedly different. Passenger car density in Beijing, for instance, has already reached 260 vehicles per 1,000 people (2017). This has led to traffic jams and severe air pollution, which result in policies by municipal governments aimed at reducing the number of conventional vehicles while promoting the development of NEVs.

This report gives a detailed overview of the various measures by which the Chinese government seeks to promote electro-mobility. The current market situation in China is examined, and the industrial policy targets of the central government explained. The body of the report provides a detailed description of the three main incentive measures: financial incentive mechanisms (4.1), non-financial incentive mechanisms (4.2), and requirements for manufacturers (4.3). Finally, the Sino-German cooperation on electro-mobility is discussed, including an examination of charging infrastructure, as well as the outlook for future developments in China.

Please click here to download: The E-Mobility Race and Chinas Determination to Win – Measures by the Chinese government to accelerate e-mobility development 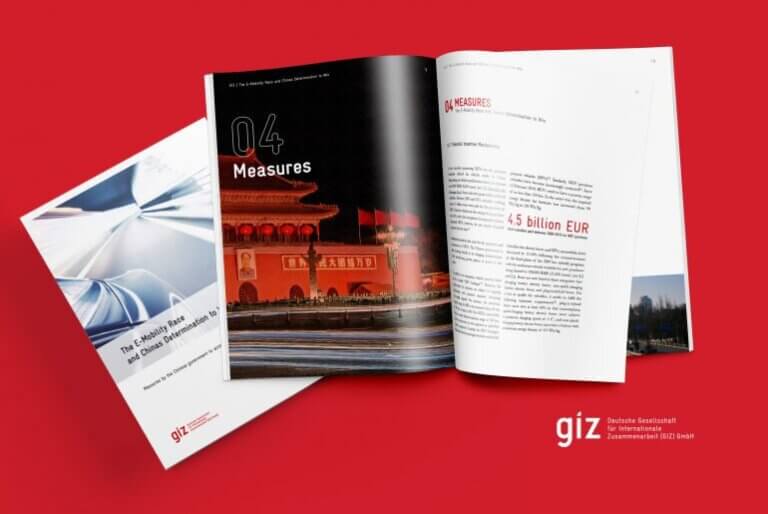